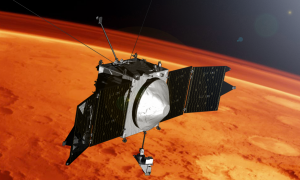 Facebook has built a solar-powered drone that it plans to deploy across the globe to provide Internet access anywhere—including remote areas in the Third World. Testing of the prototype drone is already underway in California.

If successful, the initiative could massively enlarge Facebook’s user base.

According to Facebook, 4 billion people on Earth still lack access to the Internet, and while some solutions are promising, they won’t guarantee reliable infrastructure for all.

“Ten percent of the world’s population lives in remote locations with no Internet infrastructure, and the kinds of infrastructure technologies used everywhere else—things like fiber-optic cable, microwave repeaters, and cell towers—may be a challenge to deploy cost-effectively in these regions,” Jay Parikh, Facebook’s vice president of global engineering, wrote in a blog post.

Like other solar-powered airplanes, the Aquila has a large wingspan (wider than the Boeing 747) and relatively small mass (a weight similar to that of a car), and is designed to fly continuously for three months at a time.

Flying at altitudes of 60,000–90,000 feet above sea level, the Aquila works by beaming lasers at small towers on the ground, which in turn create Wi-Fi spots for people in the vicinity. The Aquila is designed to be able to transmit data at towers within a 31-mile (50-kilometer) radius at 10 gigabits per second.

Facebook’s ambition to offer Internet access in the developing world is of course a business venture as much as a humanitarian mission.

Facebook’s ambition to offer Internet access in the developing world to billions of poor who currently lack access, is of course a business venture as much as a humanitarian mission.

In many parts of the world, Facebook offers Internet packages that grant access to the Facebook mobile app and a handful of other apps at a discount price. It’s been so successful that many users, who have no previous Web-browsing habits, confuse Facebook for the Internet, or state that they don’t use the Internet, but do use Facebook.

“People will walk into phone stores and say ‘I want Facebook,'” Facebook COO Sheryl Sandberg said at the World Economic Forum in Davos earlier this year, according to Wall Street Journal. “People actually confuse Facebook and the Internet in some places.”

The company’s practice of collaborating with mobile Internet providers to zero-rate its apps—not charge customers data fees for using it—has raised alarms from observers who see it as a violation of one of the principles of net neutrality: allowing websites to zero-rate access to themselves, they said, is a slippery slope toward a balkanized Web dominated by a few major websites.

In May, an open letter signed by dozens of Internet freedom organizations around the world accused Facebook of “building a walled garden in which the world’s poorest people will only be able to access a limited set of unsecured websites and services.”

OneWeb, founded by ex-Google employee Greg Wyler, aims at launching a global satellite system to accomplish the same goal. The venture, which raised $500 million in a fundraising round last month and would require around $3 billion to become operational, hopes to make its services available by 2019.

The plan would require hundreds of tiny satellites to be launched into Earth’s orbit. To cut down on latency—the interval of time it takes for the satellite to respond to a request—the satellites are to be placed in low orbit, at most 1,250 miles above ground level, instead of geo-synchronous orbit at 22,000 miles up. Satellites operating at such low altitudes cover a smaller area, but what they lack in range, will be made up for in numbers.

SpaceX CEO Elon Musk also plans to launch thousands of low-orbit satellites to become a global Internet provider to every corner of the world. But his vision is even bigger than that.

Musk wants to create a network of satellites providing Internet access not only to Earth, but also one day to connect the blue planet to a future colony on Mars.

“Greg [Wyler] and I have a fundamental disagreement about the architecture,” Musk said earlier this year, according to Bloomberg Business. “We want a satellite that is an order of magnitude more sophisticated than what Greg wants.