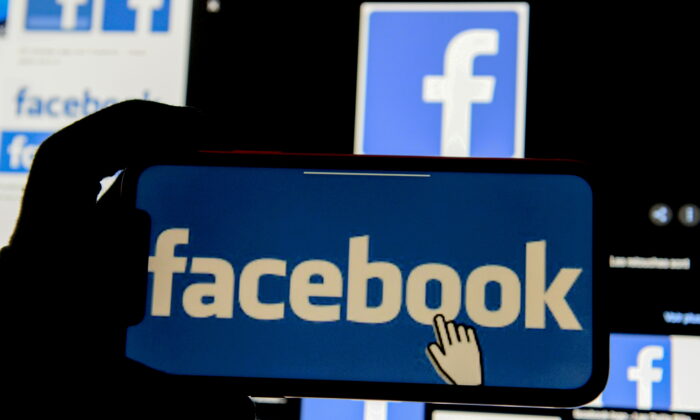 The Facebook logo is displayed on a mobile phone in a file photo. (Reuters/Johanna Geron/Illustration)
Viewpoints

A recent episode prompts me to ponder the fact that Facebook is becoming a force for censorship that might leave even some Communist Party of China members shamefaced.

Last week, I passed along a prospective editorial opinion column to The Epoch Times on behalf of two colleagues who are partners at a boutique law firm in Ottawa. Epoch Times editors liked the content and after giving it their professional scrutiny and suggesting some clarification, posted it on the outlet’s website.

The folks at the law firm were delighted and wanted their work to get even wider attention so they sought to pay to have it boosted on Facebook. Here’s the answer they got back:

“Your ad was rejected because it doesn’t comply with our advertising policies.
To learn more, view your ad in Account Quality. You can request a review if you think your ad was incorrectly rejected.”

The “failure to comply” rejection, bear in mind, came from the very same social media company whose policies of profiting from gross violations of user privacy led to it being fined almost US$5 billion in 2019. That would be the Facebook whose advertising policies let it inundate you with “friend” requests from individuals having such unlikely names as Lotsa Hotsa Buttishaken, not to mention newsfeed scams from all manner of fly-by-night shysters.

And what, you might well ask, was so egregious about the opinions expressed in the law firm partners’ column that they violated Facebook’s pristine standards? Did they advocate legalized free delivery of your stupefacient of choice with every order from Skip the Dishes? Was it a slightly more outré call for, oh I don’t know, say, decriminalizing slavery? Did it seek to convince the world in general that Holocaust deniers really aren’t, you know, such horrendous idiots once you get to know them? No, no, and nothing even remotely close.

The column made three straightforward points. 1. The boutique law firm in question has been swamped with calls from panicking Canadian workers and students terrified of losing their jobs or their academic years if they fail to comply with COVID vaccine mandates. 2. The problem the callers face isn’t one that can be solved at a legal level yet, but it can be redressed at the political level, and indeed is a function of the political response to the pandemic. 3. The people pleading with the law firm to help are, to a person, responsible, thoughtful citizens of Canada, not the conspiracy theorist wingnuts said to be the sole opposition to vaccine mandates.

“Given their roles and responsibilities, if they are all wingnuts, we have an even bigger problem in Canada than COVID presents,” the lawyers wrote.

Think about this. Here you have two legal beagles, both of whom have made representations in the Supreme Court of Canada and recently won a major freedom-of-conscience case against the federal government, arguing that something’s amiss with the vaccine mandate scheme that requires serious and immediate attention. They submit that contention by writing to the editing standards of a professional publication that is committed, on its front page, to Truth.

They don’t denigrate vaccines. They don’t counsel reckless lawbreaking. They do counsel people to stand for their rights and engage the democratic political process to do so. Yet Facebook, with its impeccable track record of meeting sterling standards of integrity and beyond-reproach content management, won’t permit the widest possible distribution of that opinion.

Now, there’s a fair argument from a libertarian perspective that Facebook is free to accept or reject whatever content it likes, and equally free to refuse any emolument to overcome its resistance to publication. That would actually be an argument if Facebook itself didn’t insist that it is not a publisher but rather just a platform where like-minded or contrary-minded contributors can freely engage.

Given that, its rejection constitutes nothing less than raw suppression of an opinion that it dislikes and does not want to see in the public domain, never mind the opinion being based on verifiable facts drawn from the experience of the writers, and from their knowledge of both law and politics.

The issue, of course, is that the full problem isn’t Facebook. It is what’s happening as dissenting arguments across North American society are stifled by a myriad of means. Facebook, admittedly, is one tool in that toolbox. But, like the Communist Party of China, it is a very large, very powerful, and extremely ubiquitous hammer.

Within the CPC, the sheer magnitude of its membership numbers opens the possibility of minor disagreement, at least within the Party’s hard red line. Now Facebook, despite its high-minded invocation of “quality” and “policy,” is busily drawing red lines of its own around the opinions dissenting citizens of democratic countries can, and cannot, promote.

Even if that causes no shamed faces in China, it should leave North Americans outraged.