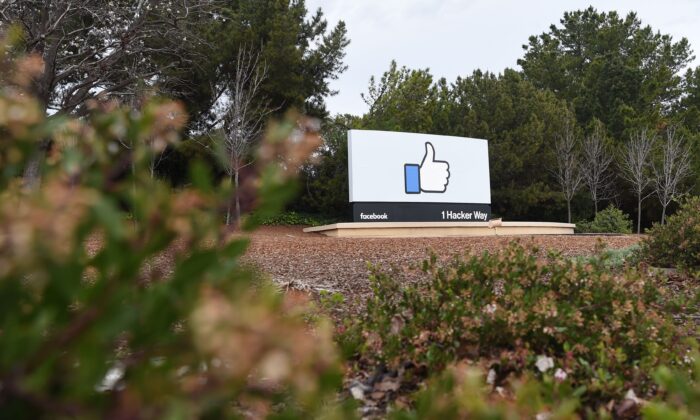 A sign is seen at the entrance to Facebook's corporate headquarters location in Menlo Park, Calif., on March 21, 2018. (Joseh Edelson/AFP via Getty Images)
Social Media

Facebook this week banned a Second Amendment group without providing notice or a clear explanation, the group’s president said.

“We were banned without notice or exact reason,” Philip Van Cleave, president of the group, told The Epoch Times via email.

Facebook didn’t respond to a request for comment. A Facebook spokesperson told the Washington Free Beacon: “This was correctly actioned and we will not be republishing.”

An attempt to view the page brought a message that “this content isn’t available right now.”

“When this happens, it’s usually because the owner only shared it with a small group of people, changed who can see it or it’s been deleted,” the message from Facebook stated.

The group was used to keep gun owners informed on legislative proposals and new laws and stories relating to gun rights in Virginia, Van Cleave said. The group has also organized peaceful rallies at the state’s General Assembly for 18 years.

“The page and group were helping to coordinate the equivalent this year – which, due to COVID, was a rolling caravan with over 1,000 vehicles driving through Richmond, decked out in with gun-rights messages, signs, flags, etc. We have never had a single violent event in our history and not one arrest,” he wrote.

He believes the ban is politically motivated.

“We were careful and had many moderators to stay in compliance. At the end of the day, we believe they just wanted to shut us up,” he said.

Facebook ramped up bans on people and groups last year ahead of the 2020 election and has continued a wave of bans since. Last month, the California-based company removed more than 78,000 users from Facebook and Instagram over alleged policy violations. It also banned former President Donald Trump for an indefinite period of time, a decision being reviewed by its Oversight Board.

In the wake of the Jan. 6 breach of the U.S. capitol, Facebook said it was monitoring the website for threats and signals of violence.

Facing pressure from Democrat lawmakers, Facebook is working on scaling back the amount of “political content” on the social media platform. It has also announced plans to stop recommending political and civic groups to users.

The bans and other actions have not only led to users abandoning Facebook, but legal action.

Conservative host Steven Crowder this week sued Facebook over alleged unfair competition and fraud. The company is also subject to an antitrust lawsuit from a West Virginia media business.