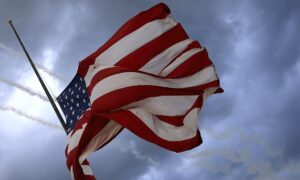 Logos of social networks Facebook and Instagram on the screens of a tablet and a mobile phone. (Lionel Bonaventure/AFP via Getty Images)
Viewpoints

Recently, Facebook took down Lara Trump’s interview with former President Donald Trump, warning that Trump’s content was banned on the platform. In doing this, Facebook made a new escalation in its censorship project.

First, Facebook took the position Trump could not post because his claims of election fraud, leading up to the events of Jan. 6, posed a clear and present danger to the peaceful transfer of power. Second, Facebook said Trump could not post at all, in a sense implying that even his future posts might pose a similar danger.

Now Facebook has taken it a step further by taking the position that even interviews with Trump conducted by others cannot be posted. Trump, let’s remember, is still the leading figure in the Republican Party, the most prominent voice of opposition, and a potential candidate in the 2024 presidential race. And Facebook and other media platforms even seem bent on erasing Trump from history, as if America had a 44th president (Obama) and now a 46th president (Biden) but number 45 has been removed from public view.

I’ve had my own issues with Facebook, which I’d like to explore here, because they show how Facebook operates in flagging or restricting content. I’ve never been banned from Facebook, but I have been flagged, demonetized for periods of time, and had to endure—as I seem to be enduring now—some form of reduced distribution. This means Facebook limits who can see my posts.

And why? Last October I got demonetized because I posted a clip of Biden saying that Antifa was merely an idea. This was a direct quotation from Biden, from his debate with Trump. Facebook said that the clip was “missing context.” But what context? Biden didn’t say anything else about Antifa that I excluded. The clip was in no way deceptively edited. Even so, Facebook penalized me for posting it.

Right now I’m facing reduced Facebook distribution for a handful of posts that the platform has decided constitute misinformation or, again, “missing context.” In one of them, I am faulted for posting a clip from my daily podcast in which I say that Kamala Harris is descended from a slave ancestor, Hamilton Brown, who owned five plantations and was one of the largest slaveowners in Jamaica.

I’m the one who broke this story. I got it from Kamala Harris’s own father, Donald Harris, who claimed the slave ancestor in an article he wrote posted on Jamaica Global Online, a Jamaican website. I was also able to locate a genealogical tree that shows the Harris lineage.

When I first posted about this, my account was challenged by Nikole Hannah-Jones, writer of the 1619 Project, and historian Kevin Levin. Neither disputed Harris’s lineage, but they blasted me for ignoring the common practice of rape on the plantation. This, they implied, is how Kamala Harris got her white slaveowning ancestor.

But these two critics were too lazy to check the genealogy I provided, showing that the grandson of the slaveowner, also named Hamilton Brown, had married a free woman of color named Jessian Prince, and this is the couple that gave birth to Christiana Brown, Donald Harris’ grandmother and Kamala Harris’ great grandmother. Rape on the plantation had nothing to do with it.

Chagrined, Hannah Jones deleted her tweet and Levin apologized for his mistaken attack on me. In effect, both of them acknowledged that my original post was right. Kamala Harris is in fact descended in a straight line from one of the largest planters in Jamaica, the man who gave his name to a whole town in Jamaica.

So how could Facebook claim I was mistaken? Facebook apparently takes its cue from so-called fact-checking sites. I decided to consult two prominent ones to see what they say. Politifact seems to confirm my account completely but then mysteriously concludes, “In the end we don’t have enough documentation.” Evidently a genealogical chart and Kamala Harris’s own father’s testimony does not seem to be enough.

If this seems strange, even stranger is what Snopes says on the subject, reviewing the exact same evidence but then declaring the claim “unproven.” Then it adds this, “Even if it is the case that the Harris family, by way of Christiana Brown, are descendants of Hamilton Brown, those who seek to attack or undermine Harris for the wrongdoing of a man who died almost 200 years ago should first gain a better understanding of the complicated, traumatic histories of black families in the United States.”

This is, of course, tendentious editorializing. Snopes seems to be covering for Harris here. So my conclusion is that these fact-checking sites are themselves untrustworthy. Had the same lineage applied to Trump, for instance, they would have been more than satisfied to confirm and broadcast his slaveholder lineage.

I’m not sure whether Facebook, in relying on partisan and tendentious fact-checking sites, is itself being duped by them, or whether Facebook has chosen to work with these sites so that they can provide ideological cover for Facebook removing or flagging content that is factual but that nevertheless disrupts Facebook’s ideologically-preferred narrative.

Facebook and other social media platforms always strike the pose that they are combating “disinformation.” But this claim itself strikes me as disinformation. If I post on Facebook that 2+2=5, will I get flagged? Probably not. How about if I post that Napoleon won the Battle of Waterloo? That’s false, but will I get demonetized for it? Almost certainly not.

What this means is that Facebook isn’t hunting down errors or misrepresentations per se. They are hunting down conservative claims that are damaging to the left’s ideological narrative. In the case of Kamala Harris, the narrative is she is a historical victim. As a black woman, she’s a “twofer,” having endured a lineage of both racism and sexism. The slaveowner Hamilton Brown ruins that tale of victimhood.

I’m not saying Facebook doesn’t have the right to regulate its own platform. I’m saying that they are doing it in an unfair and deceptive manner. They are taking facts and treating them as disinformation. They are relying on disinformation to invalidate truthful statements. In an Orwellian inversion, lies become truth and truth becomes lies.

How tragic it is that platforms that once symbolized freedom and open inquiry have now become frightening cauldrons of restriction, repression, and censorship. The very people who said they would save us from Orwell’s Big Brother have become Big Brother.