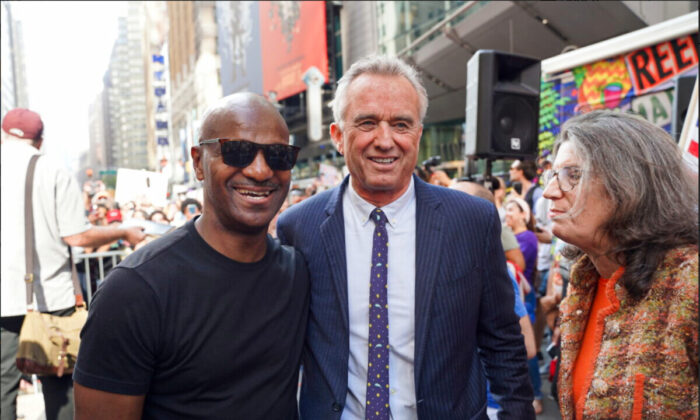 The non-profit Children’s Health Defense (CHD) has been booted off Facebook and Instagram for 30 days for allegedly violating the company’s community standards on “misinformation” about COVID-19.

“Facebook is acting here as a surrogate for the Federal government’s crusade to silence all criticism of draconian government policies. Our constitutional framers recognized this peril of government censorship,” wrote CDH founder, Robert F. Kennedy Jr., in a public statement.

“They understood that a government that can silence its critics has license for every atrocity.”

On Aug. 17, Meta notified the CHD that it had suspended its webpage for 30 days. The page had hundreds of thousands of followers.

“This is because Children’s Health Defense goes against our Community Standards on misinformation that could cause physical harm,” the notice read.

“We encourage free expression but don’t allow false information about COVID-19 that could contribute to physical harm.”

“Your page has been unpublished.”

In August 2020, the CHD filed a lawsuit against Meta, accusing the Big Tech company of censorship.

In the 150-page lawsuit, the CHD said a judicial remedy is “urgently required” to redress the damage to the organization, including the “abridgement of its fundamental rights caused by Facebook and its Chairman Mark Zuckerberg’s aggressive and illegal efforts, embarked upon in response to state pressure and in conjunction with state actors, to censor and suppress CHD’s posting of material critical of those very state actors and voicing alternative views concerning the safety and efficacy of vaccines.”

The CHD appealed against a judge’s ruling in favor of Meta and produced U.S. Centers for Disease Control and Prevention (CDC) documents the agency shared with Facebook.

“These documents, provided to Facebook on a regular basis, contained what the CDC considered misinformation,” according to the CHD.

Titled “COVID Vaccine Misinformation: Hot Topics,” the documents asked tech giants to “be on the lookout for various topics the CDC considers to be misinformation, including COVID-19 vaccine shedding, VAERS reports, spike protein data, and more.”

The CHD argues that its de-platforming by Meta came days after the CDC issued new and less restrictive COVID-19 guidelines while admitting it had made mistakes responding to the pandemic.

“Within hours of the CHD de-platforming, CDC director Dr Rochelle Walensky shared her plans for overhauling how the agency works while admitting to a flawed response to COVID-19 and pandemic missteps,” the CHD said in a statement.

“Censorship is not only unconstitutional, [but] it’s un-American,” said Roger Teich, CHD lawyer for the Meta lawsuit.

The Vaccine Injury/Side Effects Support Group on Facebook is another site facing periodic censorship. The group recently appeared in the CHD’s news publication, The Defender.

“The day after our Defender article, I got banned for a week. When I contested it, they made it 28 more days without reason,” said Donna Zuk Adley, the site’s administrator.