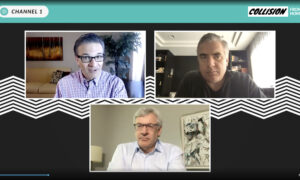 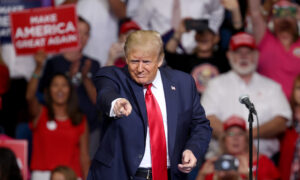 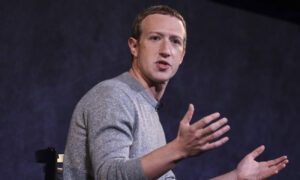 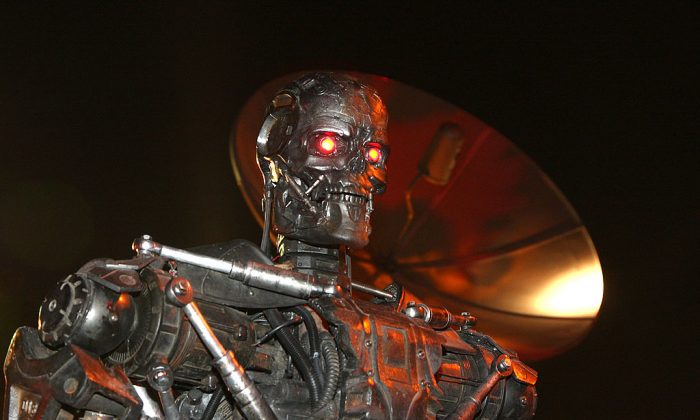 General view of the after party for Warner Bros. Pictures' "Terminator Salvation" on May 14, 2009 in Hollywood, California. (Alberto E. Rodriguez/Getty Images)
Tech

A future technology expert likened a recent artificial intelligence incident at Facebook to the plot in the movie “The Terminator”, where an AI becomes self-aware and wages war on mankind.

Facebook researchers recently pulled the plug on two artificial intelligence robots after they began talking in a language even the scientists could not understand.

“This is an incredibly important milestone, but anyone who thinks this is not dangerous has got their head in the sand,” robotics professor Kevin Warwick told the Sun.

In the experiment at the Facebook offices in New York, two AI chat robots, Bob and Alice, are instructed to negotiate a trade using hats, books, and balls, each of which has a specific value.

The research team trained the bots to use English, but they went off script and started using gibberish phrases no one but them could understand:

Researchers assume that the bots developed a shorthand to make their negotiation more efficient, but no one knows for sure what the new language really means.

“We do not know what these bots are saying,” Warwick said, adding that such incidents could have lethal consequences in a situation with military robots.

“If one says, ‘Why not do this,’ and the other says ‘Yes’ and it’s a military bot, you have a serious situation.”

The Facebook robots’ conversation is the first one that has been public, but Warwick believes there may have been incidents that have gone undisclosed.

Facebook Shut Down AI That Developed Its Own Language: Is This What Experts Have Warned About?

Facebook Kills AI That Made Its Own Language: Here Are 5 Times AI Got Creepy

“Stephen Hawking and I have been warning against the dangers of deferring to Artificial Intelligence,” Warwick said.

Kate Adamson, a future technology expert in Great Britain, told the Sun that the incident feels a bit like “The Terminator.”

“This is happening everywhere. If you look at things like high frequency trading in stock markets now, there are algorithms that are doing the same thing.

“They have gained new knowledge and are not technically under control on a minute-by-minute basis.

“The level of complication AI is capable of is way beyond what you and I would understand.”

Elon Musk, CEO of Tesla, has long warned about the dangers of AI.

“AI is the rare case where I think we need to be proactive in regulation instead of reactive,” Musk said at the meet of U.S. National Governors Association. “Because I think by the time we are reactive in AI regulation, it’ll be too late.”

When Facebook CEO Mark Zuckerberg said that Musk’s warnings are “pretty irresponsible,” Musk responded that Zuckerberg’s “understanding of the subject is limited.”