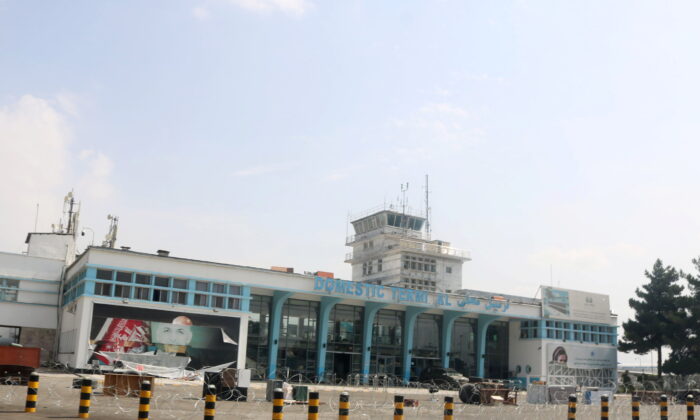 An empty domestic terminal is seen a day after the U.S. troops withdrawal from Hamid Karzai international airport in Kabul, Afghanistan on Aug. 31, 2021. (Stringer/Reuters)
By Zachary Stieber

All U.S. carriers and commercial operators are “prohibited from operating at all altitudes” in the region around Kabul, except for Department of Defense flights, the FAA said.

The air authority said the move was made because of “the risk posed by extremist/militant activity, lack of risk mitigation capabilities, and disruptions to air traffic services.”

Flights authorized by another U.S. government agency or the FAA can still operate in the restricted airspace.

The United States pulled out its last troops from Afghanistan earlier Monday, ending a 20-year war.

U.S. troops had been holding the Hamid Karzai International Airport for weeks, enabling the evacuation of tens of thousands of Afghans and thousands of Americans.

The Taliban terrorist group took control of the airport shortly after the final American troops left.

Americans were told in an Aug. 31 State Department advisory not to travel to Afghanistan.

“Do not travel to Afghanistan due to civil unrest, armed conflict, crime, terrorism, kidnapping, and COVID-19,” the alert says. “Travel to all areas of Afghanistan is unsafe. The Department of State assesses the risk of kidnapping or violence against U.S. citizens in Afghanistan is high.”

The U.S. embassy in Kabul suspended operations on Aug. 31 and no staffers are in the country. Operations were transferred to Doha, Qatar, because of “the uncertain security environment and political situation in Afghanistan,” U.S. Secretary of State Antony Blinken said in Washington.

U.S. officials have said they’ll try to help Americans and Afghans leave the country if they want to depart, even without a military or diplomatic presence there.

“We will hold the Taliban to its pledge to let people freely depart Afghanistan,” Blinken said.