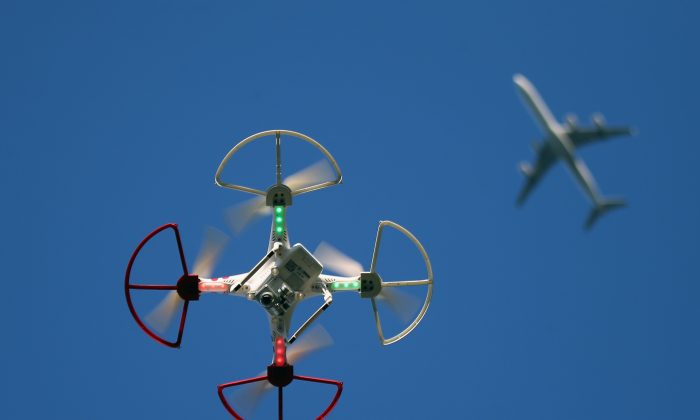 A drone is flown for recreational purposes as an airplane passes nearby in the sky above Old Bethpage, New York, on Sept. 5, 2015. (Bruce Bennett/Getty Images)
Tech

FAA Seeks to Push Through Drone Registry in Time for Christmas

The Federal Aviation Agency, notorious for its delays in rolling out drone regulation, plans to create a mandatory registration system for consumer drones that will go in effect by mid-December—just in time for the expected deluge of new drone purchases for Christmas.

The initiative was announced in late October, and about a month later, on Nov. 21, an agency-created task force, with input from drone industry leaders, released a set of recommendations for the registry.

According to the recommendations, all drones weighing more than 250 grams (0.55 pounds) would require a registered owner. To register, owners would need to enter their name and street address online or via an app. Once registered, the same unique number can be affixed to however many drones they own.

This time it is being judged by some as rushing through the registration system in time for holiday shopping.

Speeding Up the Process

Unlike other FAA regulations, which could take months to go through the required public comment process, the agency is fast-tracking the drone registration rule by issuing it as an “interim final rule”—temporary regulations that are binding until they’re replaced by a new set of rules.

“Effectively, the interim final rule is a rule that has binding effect, but also operates as a proposal for the purpose of soliciting comments,” Kevin Stack, a professor at Vanderbilt University with a background in administrative law, commented via email.

Interim final rules are generally deployed in emergency cases and require a “good cause” for implementation, but the courts, which must review submissions of good cause, “tend to be pretty deferential to the agency’s justifications,” Stack wrote.

The planned registration rules are framed as a response to a rising number of incidents where consumer drones have posed danger to spectators, pilots, and occasionally have disrupted firefighting missions.

Making every person register their drones will make those who misuse their drones easier to identify and also encourage drone owners to be more responsible with their new gadgets.

However, not all stakeholders agree. The task force’s recommendations were criticized by the Academy of Model Aeronautics, one of the largest associations of drone hobbyists in the country.

“As written, these recommendations would make the registration process an unnecessary and unjustified burden to our 185,000 members, who have operated harmoniously within the aviation community for decades and who register and provide their personal contact information when joining the AMA,” the organization said in a statement.

If the new registration system is found to be unnecessarily burdensome, advocacy groups “could sue the agency once the rule was issued, arguing that it was not justified by good cause,” Stack wrote.

Even after final rules are established, a drone registration system could potentially be challenged as illegal. The agency task force report explicitly stated that the question of whether the agency had the “legal authority” to implement a registration mandate was “outside the scope” of its mandate.

In a statement released in conjunction with the task force recommendations, the Chinese drone manufacturer DJI said that the proposed registration mandate “contradicts the provisions of several federal statutes,” although it didn’t say which ones.

A public comment sent to the FAA from the Mercatus Center at George Mason University was more specific, arguing that the mandate would violate section 336 of the FAA Modernization and Reform Act of 2012.

“Unless the FAA reverses course and restarts the process without reference to its UAS integration mandate under the FMRA, there is a possibility that registration of noncommercial drones will be overturned if challenged in court,” wrote Mercatus fellow Eli Dourado.