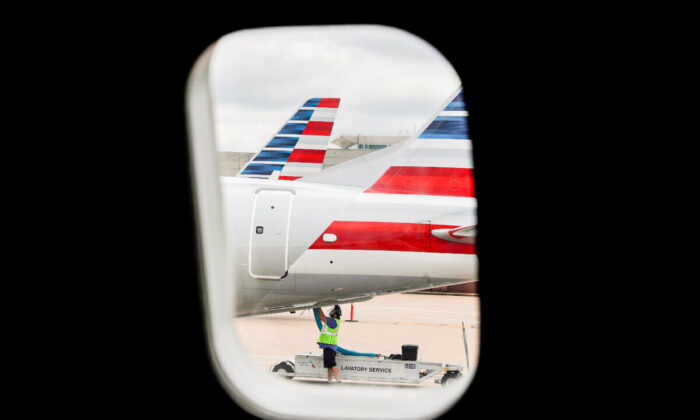 An airlines worker works on an American Airlines plane that arrived at Hartsfield–Jackson Atlanta International Airport in Atlanta, Ga. on May 19, 2020. (Shannon Stapleton/Reuters)
US News

The Federal Aviation Administration (FAA) on Thursday said it has sent 37 of its more than 5,000 complaints of unruly passengers to the U.S. Department of Justice for potential criminal prosecution.

The FAA said it has seen a “disturbing increase” in incidents of airline passengers disrupting flights with threatening or violent behavior. As of Nov. 2, the agency has received a total of 5,033 reports from airlines of unruly passengers so far this year, 3,642 of which were related to masks.

The FAA, which regulates commercial airline operations in the United States, can issue civil fines on individuals but has no authority to bring criminal charges. An FAA spokesperson said that the agency has initiated enforcement action on 227 passenger disturbances and only referred the 37 “most egregious cases” to the DOJ and FBI for review.

“Let this serve both as a warning and a deterrent: If you disrupt a flight, you risk not just fines from the FAA but federal criminal prosecution as well,” said FAA Administrator Steve Dickson.

The announcement comes after an American Airlines flight en route from New York to California was forced to land in Colorado because of an alleged assault, in which a 20-year-old California man attacked a female flight attendant. The man is facing charges of assault and interfering with flight crew on a flight, according to U.S. prosecutors in Denver.

In a statement regarding the incident, the American Airlines said they have engaged local law enforcement and the FBI and are providing them with all the information they might need.

“The individual involved in this incident will never be allowed to travel with American Airlines in the future, but we will not be satisfied until he has been prosecuted to the full extent of the law,” the company said. “This behavior must stop, and aggressive enforcement and prosecution of the law is the best deterrent.”

While the Biden administration has yet to announce any plan to make a federal no-fly list for unruly airplane passengers, Transportation Secretary Pete Buttigieg has applauded the idea.

“I think that should be on the table,” Buttigieg said in an Oct. 31 interview with CNN’s “State of the Union.”

“The [FAA] stands strongly with flight crews. It’s why you’re seeing some really harsh penalties and fines being proposed,” he said. “There is absolutely no excuse for this kind of treatment of flight crews in the air or any of the essential workers, from bus drivers to air crews who get people to where they need to be.”

“We will continue to look at all options to make sure that flight crews and passengers are safe,” he added.