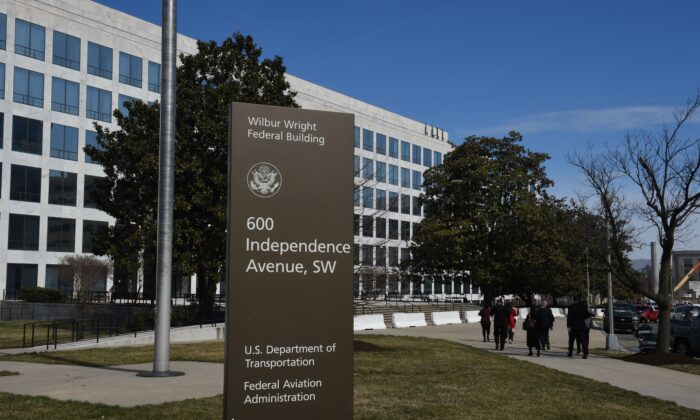 The Federal Aviation Administration (FAA) building is seen in Washington on March 13, 2019. (Eric Barada/AFP via Getty Images)
US News

In a memo, the Federal Aviation Administration (FAA) issued a “Safety Alert for Operators” that warned (pdf) of “a wide range of other automated safety systems rely on radio altimeter data whose proper function may also be affected.”

“Anomalous (missing or erroneous) radio altimeter inputs could cause these other systems to operate in an unexpected way during any phase of flight … most critically during takeoff, approach, and landing phases,” the agency said.

This month, the FAA previously issued directives warning that 5G interference could result in some flight diversions. More information will be provided by the FAA before the Jan. 5 rollout, it said.

The “5G interference could adversely affect the ability of aircraft to safely operate,” their letter said, adding it could have “an enormous negative impact on the aviation industry,” reported Reuters.

The Boeing-Airbus letter cited an analysis from trade group Airlines for America that if the FAA 5G directive had been in effect in 2019, about 345,000 passenger flights and 5,400 cargo flights would have faced delays, diversions, or cancellations.

In its latest alert, the FAA noted 17 different aircraft functions and safety protocols that might fail if 5G airwaves interfere with radar systems.

“The FAA is working with the aviation and wireless industries to find a solution that allows 5G C-band and aviation to safely coexist,” the agency said.

At the same time, the FAA released a “Special Airworthiness Information Bulletin” on the potential 5G issue that recommends that radio altimeter manufacturers, aircraft manufacturers, and operators voluntarily provide information to federal officials about ” altimeter design and functionality.”

United Airlines Chief Executive Scott Kirby said last week that FAA’s 5G directives would bar the use of radio altimeters at about 40 of the country’s biggest airports. But wireless industry group CTIA has said that 5G is safe and accused the aviation industry of fearmongering and distorting facts.

“There appears to be no valid scientific or engineering basis to justify a delay, and there is overwhelming evidence to support rapid deployment. 5G operates safely in the C-Band without causing harmful interference to air traffic,” the group’s president wrote Nov. 18 in an opinion piece.

In November, AT&T and Verizon delayed the commercial launch of C-band wireless service by a month until Jan. 5 and adopted precautionary measures to limit interference.

Meanwhile, the Air Line Pilots Association earlier this week said that aviation and communications regulators are at a stalemate.

“That’s a big problem for passengers, shippers, and the American economy,” the group said of the impasse.