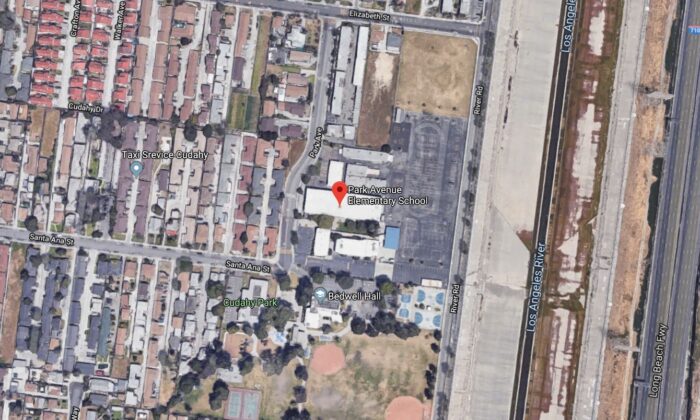 A plane returning to the Los Angeles Airport on Tuesday apparently dumped fuel on a school playground, and paramedics have treated more than a dozen children, said officials. (Google Maps)
US News

A plane returning to the Los Angeles Airport on Tuesday apparently dumped fuel on a school playground, and paramedics have treated more than a dozen children, said officials, which prompted the Federal Aviation Administration to initiate an investigation.

The Los Angeles County Fire Department said that 17 children and nine adults have “minor injuries” and none were taken to nearby hospitals. “There are no evacuation orders for the immediate area,” it wrote. “Substance was confirmed JET FUEL.”

The fuel struck them at Park Avenue Elementary School in Cudahy, California, which is about 15 miles from the Los Angeles Airport.

The department wrote that “70 firefighters and paramedics on-scene and committed to providing care for those insured.”

UPDATE*** 17 children and 6 adults (23 patients total) all complaining of minor injuries being triaged by LACoFD Paramedics and Firefighters.

Los Angeles Fire spokesperson Nicholas Prange told the Los Angeles Times that two classes were outside when the liquid rained on them at around noon.

Students and staff were told to go inside and shelter in place.

The LA Times also reported that the jet landed safely at the airport soon after. Police could be seen behind the plane with sirens.

“Students and staff were on the playground at the time and may have been sprayed by fuel or inhaled fumes,” the school district said in a statement to NBC Los Angeles. “Schools immediately called paramedics, who are on the scene and are treating anyone who is complaining of skin irritation or breathing problems.”

The Federal Aviation Administration released a statement about the incident: “Delta Air Lines Flight 89 declared an emergency after departing from LAX, returned to the airport and landed without incident. The FAA is aware of and looking into reports that children at a school east of LAX are being treated for fuel exposure.”

The flight was operated by Delta Airlines, which issued a statement on why the plane was forced to dump fuel.

“Shortly after takeoff, Flight 89 from LAX to Shanghai experienced an engine issue requiring the aircraft to return to LAX. The aircraft landed safely after an emergency fuel release to reduce landing weight,” Delta said in a statement to ABC7.