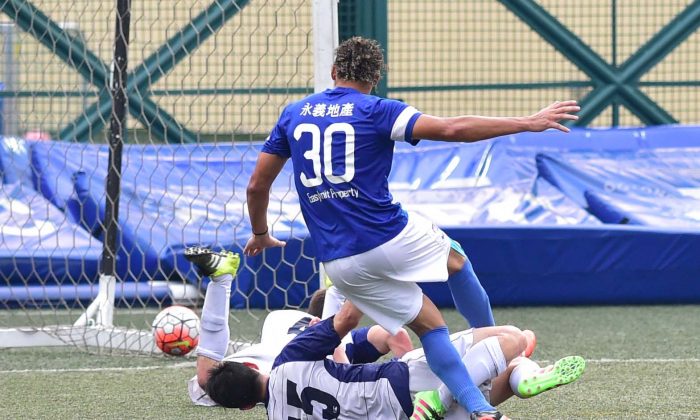 After slipping the ball past a charging Lucky Mile goalie, Beto Doc Santos, Jose Wellington of Easyknit Property, side foots the ball into the net while under pressure from two Lucky Mile defenders, increasing the lead of Easyknit Property to 4-2, the final score, in the HKFA First division match at Sports Road on Sunday May 1, 2016. (Bill Cox/Epoch Times)
HK Football

HKFA FA Cup semi-finals between Yuen Long and BC Rangers, and Kwoon Chung Southern, were both played at Mongkok Stadium on consecutive days, last weekend.

In Saturday’s (Apr 30) game, Yuen Long prevailed in their game against BC Rangers, the tie eventually settled 2-1 to Yuen Long. Although BC Rangers took the lead in the 50th minute, after a goalless first half, when Quentin Lendresse scored from an Elvision Gomez free kick, Yuen Long struck back to equalise in the 65th minute when Fabio Alcantara headed in Ip Chung-long’s corner, and then won the game in the 89th minute when Liu Songwei put through his own goal after a cross from Aleksander Randelovic.

In Sunday’s (May 1), Hong Kong Pegasus overcame Kwoon Chung Southern 2-0, courtesy of Diego martins finish from Lee Ka-ho’s 33rd minute corner, and an 87th minute finish from Wong Wai from Diego Martins cross. The Cup Final will be at Hong Kong Stadium on Sunday May 15.

In the first division, the match between Citizen and Kwai Tsing finished as a one all draw, Sun Hei were 1-0 winners against Shatin, Double Flower defeated Yau Tsim Mong 4-2, Kwun Tong overcame Metro Gallery Sun Source 2-1, HKFC beat Tai Po 5-1 in a top of the table clash, Tai Chung were 3-0 winners against Wanchai, and Easyknit Property won against Lucky Mile 4-2.

Tai Po lead the table with 56 points to claim the championship, with HKFC 2nd with 53 points, and Sun Hei 3rdwith 52 points all from 24 games.

Hong Kong Football Club, still 3 points behind Tai Po with 2 games left to play have the harder matches left to play: Citizen and Sun Hei currently placed 5th and 3rd in the table respectively. Tai Po on the other hand play mid table Wanchai and Metro Gallery Sun Source (3rd from the bottom). If all goes to form, Tai Po should keep their heads in front to the season’s end.

Eastern District lead the division with 49 points, with Tung Sing second on 48 points, and Sparta Rotterdam Mutual third with 42 points all from 21 matches. The leaders should be promoted, with only the title to be decided between the two.

Central & Western lead the table with 75 points from 28 matches, with Hoi King second with 72 points from 27 games, the only outstanding item being the championship between the 2.

The league rounds are now completed with just the Cup Final and Chairman’s Cup Final to be decided.