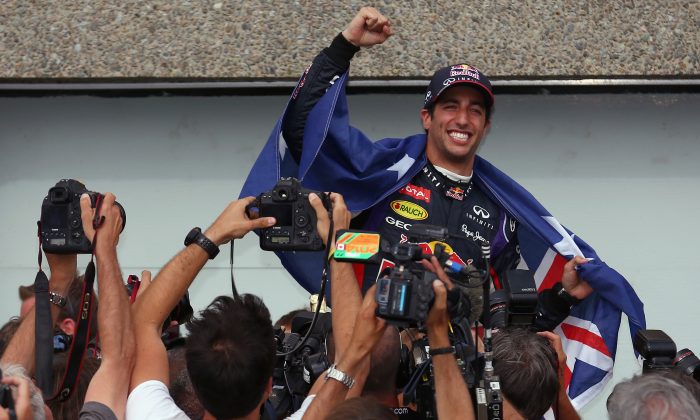 Mercedes will not have its perfect season in 2014, but Red Bull’s Daniel Ricciardo is having the best season of his nascent career.

Ricciardo started 2014—his third full season in Formula One—with a podium finish, only to have it stripped away because of a technical violation. The 24-year-old Australian made up for that Sunday by capturing his first F1 victory in the Canadian Grand Prix.

He is the first non-Mercedes winner in the seven races so far.

“I am still a bit in shock,” Ricciardo said in the podium interview on NBC, as he looked out at a sea of Australian flags.

“The race really came to life the last 15 to 20 laps. We saw Hamilton had a problem, and then Rosberg was slow on the straights.

“I was really struggling to get past Perez. He had a pretty good car down the straight and he was holding me off in the corners. I finally got a run out of the last chicane and made a nice move into Turn 1, and then set my sights on Nico. With a couple laps to go, I just found myself in the right spot to hit the DRS.

“An amazing feeling right now. I am really grateful for this.”

Ricciardo started sixth and stayed there through the first half of the 70-lap race around Île de Montréal’s 2.7-mile, 14-turn Circuit Gilles-Villeneuve—a circuit notoriously hard on brakes.

It was brakes, or rather the Kinetic Energy System, which recharges off the brakes, which felled the mighty Mercedes team and gave Ricciardo his chance.

Mercedes drivers Nico Rosberg and Lewis Hamilton were having their own private race 25 seconds ahead of the field when on Lap 37, Hamilton reported his KERS was malfunctioning, robbing him of power to accelerate and also to stop.

Rosberg soon suffered the same problem, though he was able to finish while Hamilton had to withdraw on Lap 48.

Rosberg made his second pit stop on Lap 48 and rejoined in second position, behind Williams driver Felipe Massa—this was the first time all season any car but a Mercedes had led a Grand Prix. When Massa made his second stop later that lap, Ricciardo inherited third behind Force India’s Sergio Perez, who had advanced on a one-stop strategy.

This left Rosberg with a precarious lead over Perez, Ricciardo, and Ricciardo’s teammate Sebastian Vettel, all of whom were on older tires, but none of whom had mechanical problems. Less than two seconds covered this group of four, and they stayed that close until Felipe Massa joined the fray on Lap 60.

Massa’s Williams had about eight miles per hour in top end on Vettel’s Red Bull, and the former Ferrari driver pushed the four-time world champion to the limits of his skill. Meanwhile Ricciardo harassed Perez until the Force India’s brakes faded, and on Lap 66 Ricciardo swept into second place.

Two laps later the young Australian overtook Rosberg for the race lead—only the second time all season a non-Mercedes had led a lap.

Vettel fought his way past Perez on Lap 69, and on Lap 70 Massa tried to do the same, but missed in a big way. Massa struck the Force India’s left rear wheel and shot across the track just a few feet ahead of Vettel, slamming to a stop in the tire barrier across the track.

The wreck brought out a safety car, but the race was effectively over anyway. Daniel Ricciardo had 4.2 seconds on Rosberg and five on Vettel.

Red Bull’s first win of 2014 came not from its older “wunderkind”, four-time champion Sebastian Vettel, but from its new Wunderkind. The win pushed Ricciardo into third in the points behind the two Mercedes drivers.

Formula One heads back across the Atlantic for its next race, the Austrian Grand Prix on June 22nd. Visit Formula1.com for tickets and travel packages.