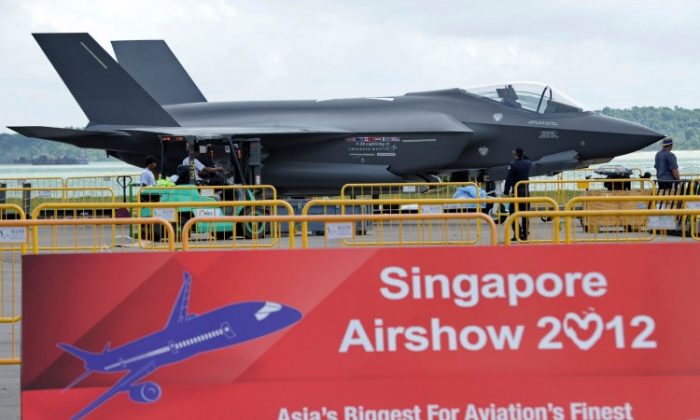 A Lockheed Martin's F-35 Lighning II fighter jet sits on the tarmac for static display at the Singapore Airshow in Singapore on February 12. (ROSLAN RAHMAN/AFP/Getty Images)
US

The Defense Department’s next-generation F-35 fighter jet that is currently being developed began its first flight tests near Edwards Air Force Base in California’s Mojave Desert.

The Lockheed Martin Corp.-developed supersonic fighter plane, otherwise known as the “Lightning II,” was carrying external missiles during the test flight, the company said in a statement.

The F-35 program is the most expensive program currently being developed by the Pentagon, with the U.S. military planning to purchase more than 2,400, costing $382 billion. There will be three variants on the fighter plane and it is capable of air-to-ground attacks, air defense, reconnaissance with stealth ability, and can land and take off from aircraft carriers.

Last month, a prototype of the jet made its first night flight at Edwards Air Force Base, the Joint Strike Fighter Program said in a statement at the time.