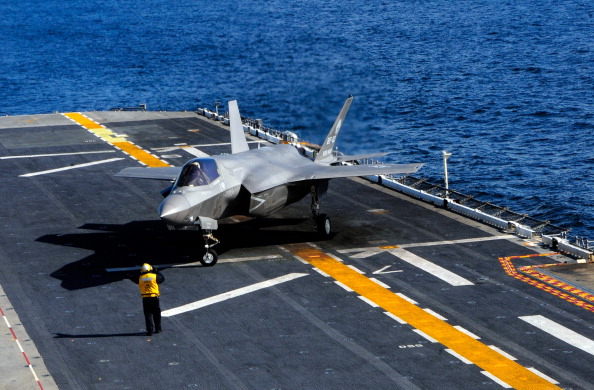 In this handout image provided by the U.S. Navy, an F-35B Lightning II makes the first vertical landing on a flight deck at sea aboard the amphibious assault ship USS Wasp on October 3, 2011 in the Atlantic Ocean. The F-35B is the Marine Corps Joint Strike Force variant of the Joint Strike Fighter and is designed for short takeoff and vertical landing on Navy amphibious ships. (Photo by Natasha R. Chalk/U.S. Navy via Getty Images)
US

One of the latest issues with the F-35 Lightning II fighter involves something seemingly basic: fuel.

The Air Force said that crews at Arizona’s Luke Air Force Base said the F-35 might not be able to use fuel that is hotter than a certain temperature.

The military said that the dark-green trucks that contain the fuel absorb too much heat from the sun, which can’t be used by the planes.

It’s worth noting that the planes would likely be deployed in the Middle East and South Pacific, where it gets hot.

“We painted the refuelers white to reduce the temperature of fuel being delivered to the F-35 Lightning II Joint Strike Fighter,” said Senior Airman Jacob Hartman of the 56th Logistics Readiness Squadron at Luke Air Force Base in Arizona, according to the Air Force.

He added: “The F-35 has a fuel temperature threshold and may not function properly if the fuel temperature is too high, so after collaborating with other bases and receiving waiver approval from [the Air Education Training Command], we painted the tanks white.”

The change in the color of the trucks was adopted after it was first implemented at Edwards Air Force Base, located in Southern California.

Chief Master Sgt. Ralph Resch, “We are taking proactive measures to mitigate any possible aircraft shutdowns due to high fuel temperatures in the future.” Resch said that the move to paint the fuel tankers is only a “short-term goal,” adding that “the long-term fix is to have parking shades for the refuelers.”

The Air Force noted that the white paint used for the tankers is a solar polyurethane enamel that reflects sunrays.

Despite the bad press, Major Matt Hasson of Luke AFB told NBC that the “jets are performing phenomenally … there’s no problem.”

He also clarified in saying that “aircraft shutdowns” due to hot fuel doesn’t mean the plane’s engine will be shut down.