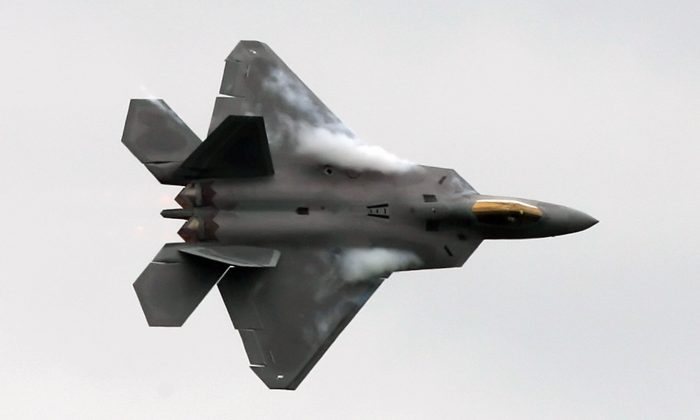 A US F-22 Raptor fighter flies during an aerial display at Farnborough Airshow, Hampshire on July 14, 2008. A contingent of F-22s will join F-35s and other jets during a massive air exercise in South Korea Dec. 4 - 8, 2017. (CARL DE SOUZA/AFP/Getty Images)
Asia & Pacific

F-22 Raptors Deployed to Japan as Show of Force to China, N. Korea

The US Air Force has deployed several F-22 Raptor jets from an Alaska air base to Japan to partake in exercises, according to reports.

The deployment, according to the Aviationist, has the dual purpose in allowing “U.S. aircrews fly and train with local Japan Air Self Defense Forces, and show the presence of Washington’s most advanced fighter plane in service in a region where tensions have risen over maritime disputes in the South China Sea.”

The joint exercises have been held biennially since 1986.

In early November, F-22s joined the new F-35s at Eglin Air Force Base, Florida, for a training exercise, according to the Air Force Times. “The F-22 and F-35 squadrons integrated very well,” F-22 pilot Maj. Steven Frosham wrote in a news release. “The lessons learned and tactics developed from this training opportunity will help to form the foundation for future growth in our combined fifth-generation fighter tactics.”

An F-22–which costs around $412 million each–was also used to carry out bomb missions in Syria, targeting ISIS, or the Islamic State, in its combat debut.

The Raptor jet has been plagued with problems before it was officially introduced into service in 2005. Pilots have reported losing consciousness while in the air. The Air Force has said it solved the issue.

According to the Wall Street Journal, Air Force officials didn’t say what ISIS targets in Syria were bombed by the F-22.

“The ultimate decision being made—that we are to use this aircraft against an adversary—is a unique and momentous decision for the United States Air Force,” said an Air Force official, according to the paper.