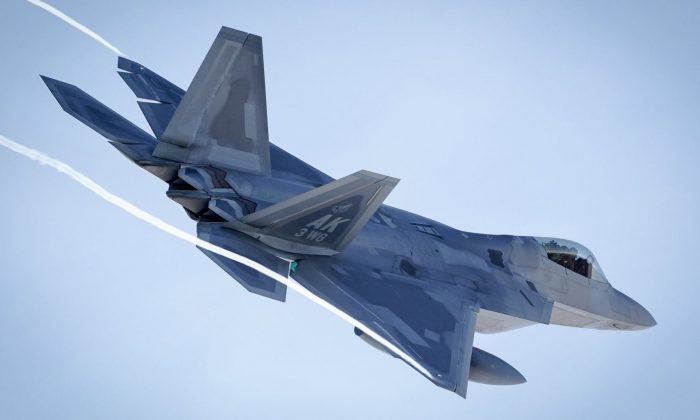 An F-22 Raptor fight jet assigned to Florida’s Eglin Air Force Base in Florida crashed after performing a training exercise, the base said in a statement.

The crash occurred at around 9:15 a.m. about 12 miles northeast of the base, the Air Force statement read.

The pilot ejected safely from the plane and was taken to 96th Medical Group hospital at Eglin for an evaluation, according to the military. The unnamed pilot is in stable condition.

“There were no other individuals on the aircraft. There was no loss of life or civilian property damage related to the accident,” the statement read.

First responders have arrived on the scene of the crash, which was also secured.

An Air Force investigation was been launched into the matter.

The plane that crashed was not involved in a flyover earlier in the area that was part of a U.S.-wide salute to medical workers and first responders during the CCP (Chinese Communist Party) virus pandemic, according to The Drive.

Officials at Tyndall Air Force Base in Florida announced the cancellation of flyover routes in the area.

“Due to unforeseen circumstances, the demonstration team will not be flying over Mexico Beach or Gulf County. We apologize for the inconvenience,” it said in a statement on Friday.

The F-22 is among the most advanced fighter planes flown by the U.S. military, having radar-evading stealth properties and the ability to destroy several targets. The Air Force has about 180 F-22 planes in its inventory, meaning that the loss of just one is significant.

Each Raptor costs about $140 million per plane.