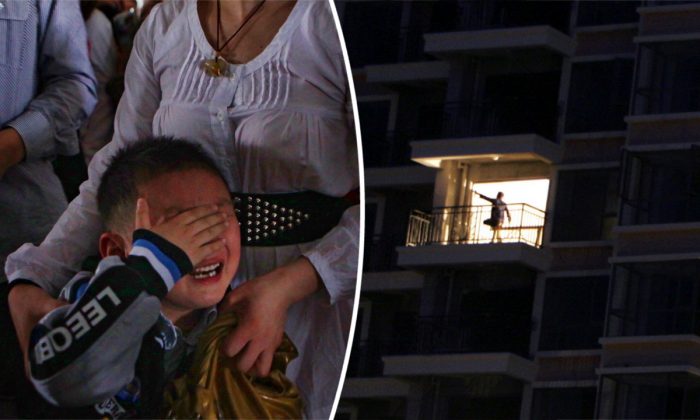 An eyewitness saw a woman hurting her son through their bedroom window, videotaped the incident and shared the content online, according to The Beijing News. The police said that the treatment was only discipline, and did not constitute abuse.

The footage shows the mother pinning the boy onto the bed, with his hands apparently bound behind his back, while he flails and screams wildly under her. The footage was recorded by a neighbor in the same housing complex in Xi’an City, Shaanxi Province, China on June 26, according to The Beijing News.

The police let the parents off with only a warning.

The Line Between Discipline and Abuse

The unnamed eyewitness said the most recent beating was at 10:22 p.m. that night. In the video, the child appears to be face down on the bed, with his hands behind his back. The mother is kneeling over him, and intensely pushes him down onto the bed.

The child screams and cries wildly during the entire process, but can not get away from her. The eyewitness alleged that the mother often beats the child, but some of the footage is obscured by the walls of the building.

When the videos were originally shared, the eyewitness said that this is a daily occurrence, according to The Beijing News. The eyewitness went on to say that the parents used tape and rope to bind the child, and stuffed cloth into his mouth to keep him quiet.

After the incident that night, the child was said to be up until 11:30 working on homework, according to the Xi’an Police bulletin.

“[They] beat the kid daily, I almost can’t put up with it,” the  unnamed eyewitness wrote through text messages, according to The Beijing News. “His screams are so loud, it really messes with the neighbors sleeping.”

The police then went to the house involved on June 27, and questioned the family of three.

After investigating, the police said that the mother beat the child because he did not study well. This led to an argument between the two. “The father was at home the whole time, and there wasn’t any binding [of the child] with rope or tape,” according to the police bulletin.

In the video, the child’s hands remain stuck behind his back, even when the mother is not touching his arms.

The police only gave a warning to the parents, saying that one can not be too emotional when educating a child, according to the Xi’an Police online bulletin.