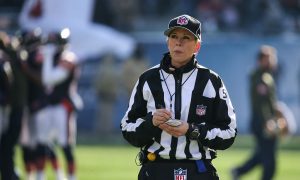 The New Orleans Saints lost to the Los Angeles Rams in the NFC Championship game on Jan. 20.

Alluding to frustration from Saints fans over perceived bad calls from the refs, Covington-based Louisiana Family Eyecare took to Facebook to make the offer.

“We will GLADLY provide no-cost eye exams to all NFL officials prior to next season to prevent the atrocity that occurred tonight,” the company said on Sunday night. “We would hate for someone else to feel our pain.”

Another Saints fan who owns an optometry practice also complained about the lack of calls through the guise of a free offer.

“In light of the atrocious lack of calls during the New Orleans Saints game we would like to extend free eye exams and glasses to any NFL referee in need. You know who you are,” wrote Crystal Eye Vision, located in College Station, Texas.

The Saints lost 26-23 to the Rams in overtime after a heavily disputed play that some people believed should have resulted in a pass interference penalty.

A wide receiver who was trying to catch the ball was hit well before the ball arrived by a Rams cornerback, as widely circulated video footage of the play showed.

In addition to pass interference, critics said the Rams should have been called for a helmet-to-helmet hit. The penalties, if called, would have given the Saints a fresh set of downs.

Saints coach Sean Payton was among those stunned by the non-call.

“I don’t know if there was ever more obvious pass interference,” he told reporters. “We’ll probably never get over it.”

In response, referee Bill Vinovich said that calls and non-calls are a “judgement call by the officials.”

Sean Payton says he just got off the phone with the league office. The NFL told Payton that they blew the call.

“I don’t know if there was ever more obvious pass interference.”

Here is the pool report from referee Bill Vinovich on the pass interference non-call in #Rams–#Saints pic.twitter.com/na9sUwRtlS

“I personally have not seen the play,” he added. Asked if the refs could have reviewed the play, he said that it was not a reviewable play.

Payton said that if pass interference was called, the Saints would have had a first and 10 and likely would have won the game.

“It’s frustrating, you know. Just getting off the phone with the league office, they blew the call, there were a lot of opportunities through,” he said.

“But that call makes it first and ten, we’re on our knee three plays, and it’s a game-changing call. It’s where it’s at. It’s disappointing.”

Nickell Robey-Coleman, the cornerback who made the hit, was also surprised by the no-call. “Came to the sideline, looked at the football gods and was like, ‘Thank you,'” Robey-Coleman said, reported WWL. “I got away with one tonight.”

The Rams will now face the New England Patriots in the Super Bowl on Feb. 4.