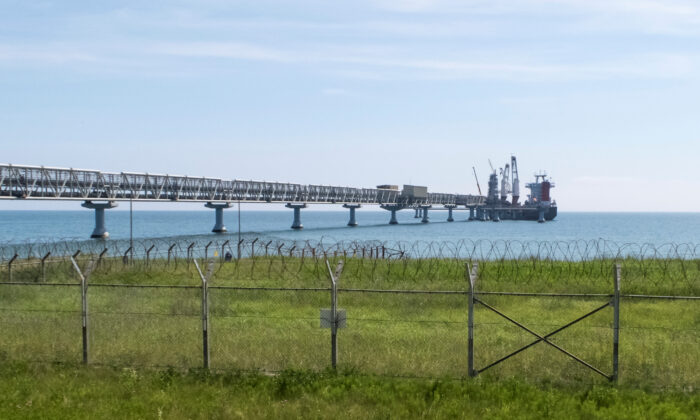 A general view of the liquefied natural gas plant operated by Sakhalin Energy at Prigorodnoye on the Pacific island of Sakhalin, Russia, on July 15, 2021. (Vladimir Soldatkin/Reuters)
Companies

ExxonMobil has taken preliminary steps to sue the Russian Federation after Russian President Vladimir Putin intervened to block the energy company’s exit from the country.

The Wall Street Journal reported on Aug. 30 that Exxon recently issued a notice of difference to the Russian government, following a presidential decree issued by Putin that would prevent the company from exiting the Sakhalin-1 project, a large-scale project that has been drilling for oil from off the Pacific coast of Sakhalin, a Russian-controlled island in the Japanese archipelago, since 2005.

The Sakhalin-1 project, of which ExxonMobil is the principal operator, produced more than 200,000 barrels of crude oil daily last year, and the project includes the world’s longest oil well, the Z-44 Chayvo Well. Despite the lucrative yields and high sunk costs of the Sakhalin-1 project, the company’s continued involvement with Russia constitutes a challenge for the company’s public relations in the West, as well as a humanitarian concern for the fossil fuel giant.

“ExxonMobil supports the people of Ukraine as they seek to defend their freedom and determine their own future as a nation. We deplore Russia’s military action that violates the territorial integrity of Ukraine and endangers its people,” ExxonMobil said in a statement.

“In response to recent events, we are beginning the process to discontinue operations and developing steps to exit the Sakhalin-1 venture. … Given the current situation, ExxonMobil will not invest in new developments in Russia.”

However, the efficacy of the lawsuit remains an open question to some analysts observing the situation. Geopolitical consultant Matthew Easton expresses skepticism about the effectiveness of ExxonMobil’s ultimatum, arguing that the lawsuit would only be efficacious under conditions that ExxonMobil had no incentive not to operate within Russia.

“The lawsuit is a bit of a Catch-22,” Easton told The Epoch Times. “As long as sanctions are in place, Russia has no incentive to play nice with ExxonMobil. If the sanctions were to go away, Russia would have to deal with Exxon more diplomatically.

“However, if the sanctions went away, Exxon wouldn’t be seeking to pull out of the current deal, and there would be no need for a lawsuit.”