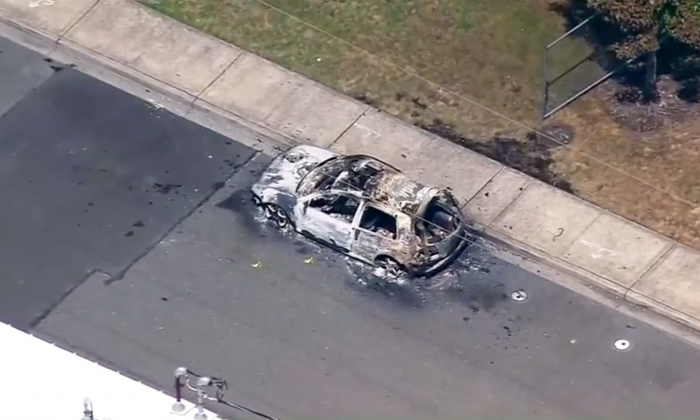 Anarchists, members of Antifa, and other extremists have eulogized a man who was killed by police while attacking an immigrant detention center with incendiary devices.

A group of roughly two dozen anarchists and Antifa members on July 14 placed candles near the site of the attack at the privately operated Northwest Detention Center in Tacoma, Washington.

The Pierce County Medical Examiner’s Office identified Willem Van Spronsen of Vashon Island as the man who threw firebombs through the windows of the detention center and at cars in the parking lot. By the time police arrived, Van Spronsen, who was also carrying a rifle, had set one car on fire and had attempted to blow up a propane tank. Photos from the center show broken windows and scorched glass.

A website run by Antifa members and anarchists posted a lengthy eulogy for Van Spronsen, describing his attack as “heroic.”

“Willem Van Spronsen chose to think for himself. He took personal responsibility and did what he could to put an end to what he recognized as injustice,” the statement, posted by an anonymous group called Crimethink, said.

The Puget Sound Anarchists, the group that identified Van Spronsen as a friend and comrade, described his actions as “inspiring” and wished that his attack had been more effective.

“Those vehicles being destroyed is only a start of what is needed. We wish the fires Will set had freed all the inmates and razed the entire Northwest Detention Center to the ground,” the group wrote in a post on their website.

The Puget Sound John Brown Gun Club identified Van Spronsen as a former member. Van Spronsen can be seen wearing a hat with the group’s acronym in a video filmed by journalist Andy Ngo at an Antifa rally on Dec. 1, 2018. The group’s Twitter page says that it is “anti-fascist, anti-racist, anti-capitalist, anti-patriarchy.”

“[Van Spronsen] cared deeply about making the world a better place and he felt injustice towards others as personal as a wound,” the group said in a statement. “He took direct action to protect traditionally marginalized and threatened communities.”

CNN featured the Puget Sound John Brown Gun Club in an episode of its “Shades of America” series. The show’s host, W. Kamau Bell, told the CNN viewers to “do what you can to support them.” CNN did not respond to a request for comment.

Van Spronsen mailed a manifesto to some of his associates prior to the attack. In the three-page note, Van Spronsen identified himself as a member of Antifa and railed against what he called “concentration camps.”

While Antifa publicly proclaims to be fighting fascism, the group is composed of communists, anarchists, and anti-capitalists. The New Jersey Office of Homeland Security and Preparedness (OHSP) describes members of Antifa as anarchist extremists.