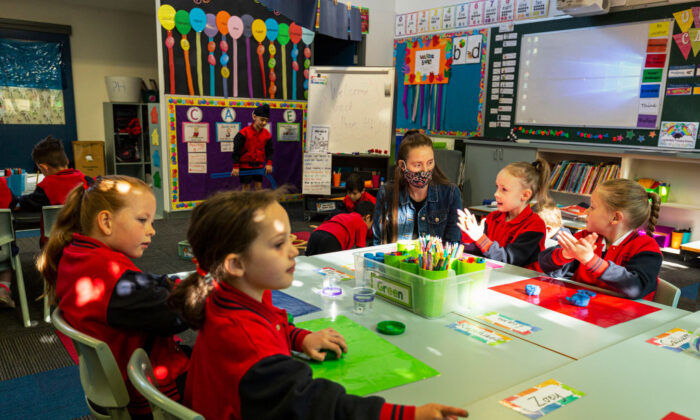 A Liberal Democrats candidate has warned of the “dangerous US-style ‘woke’ ideology” taking over Australian classrooms through the teachings of gender fluidity and sex education.

Candidate for Brisbane’s Western suburbs of Ryan, Damian Coory, who is a former local journalist, said he’ll push for a federal review of sex education curricula in schools to give parents more control over what concepts are taught to their children while they are entrusted to teachers at schools.

“Dangerous US-style ‘woke’ ideology is being promoted by education bureaucrats much to the concern of school leaders, teachers and parents,”  Coory said in a press release.

He noted both teachers and parents have reached out to him on the campaign trail to raise this as a major issue of concern, “unprompted.”

“One even told me she feared the teaching of extremist modern gender theory to primary school-age kids was a form of ‘grooming’.”

If children were to be taught “tolerance for people with a different sexual orientation,” it should be parents who do it, not the school, Coory added.

“It also must not push the idea that every child needs to consider their ‘gender’, nor the idea that gender fluidity is the norm—this is the point at which compassionate education becomes a form of ‘grooming’.”

Born in Queensland in 2000, the Liberal Democrats party advocates classical liberal principles of small government, low taxes, limited regulation and maximum freedom. It is fielding its largest group of candidates ever in the 2022 federal election led in Queensland (QLD) by former QLD Premier and Brisbane Lord Mayor Campbell Newman.

Coory’s comment comes after the Australian Curriculum Assessment and Reporting Authority (ACARA) introduced the revised Version 9.0 curriculum on April 1, which reveals Year 5-6 students will learn about “the impact of transition and change on identities” while Year 7 students will be taught about “valuing diversity and promoting inclusivity.”

Amidst the emergence of  progressive concepts being taught in classrooms, One Nation Leader Mark Latham has championed a parental rights bill, which states that “schools must recognise that parents are primarily responsible for the development and formation of moral and ethical standards and social and political values in their children.”

The proposed legislation, introduced in 2020, has been rejected by the state NSW Parliament and NSW education unions, but Latham said he would continue to muster parliamentary support.

If passed, the bill would have prohibited schools and teachers from teaching gender fluidity concepts, allow parents to be consulted at the beginning of the school year on what their children will learn, ban students from playing in high school sports team that does not correspond with their biological sex, ask trans students to undergo full medical transition to use toilets aligning with their identified gender, and ban school’s practice to keep students’ new gender identity a secret from their parents.

But NSW Education Minister Sarah Mitchell said in a statement obtained by The Guardian that the bill could become a source of discrimination.

“Every child has the right to receive an education of the highest quality, and the NSW government supports the right of every student and teacher to be themselves at school and to fulfil their potential,” she said. “NSW schools have legal obligations to protect and support students, including those who are same-sex attracted or transgender.

However, Latham asserted that it is about protecting children from confusing gender ideology that he cannot fathom being “a legitimate part of the education system.”

“If adults want to change their gender every other day, that’s their business,” he told The Epoch Times.

“I don’t see how this has got anything to do with discrimination. This is basic child welfare and child protection question. And also a basic question about what is the true and proper role of a school.”