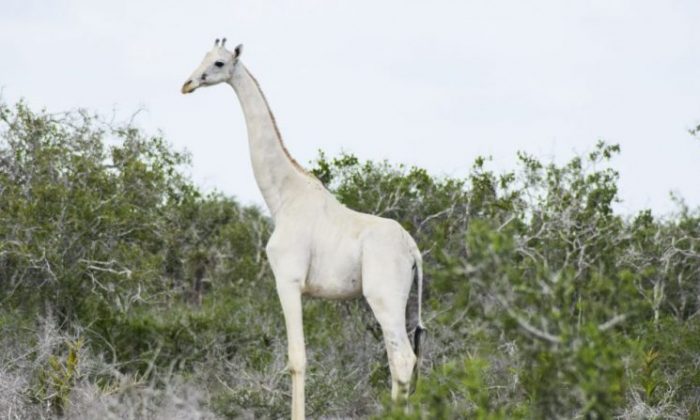 One of the rarest creatures on earth. (Hirola Conservation Program)
Africa

Conservation rangers spotted one of the rarest mammals on earth this summer and recorded the first ever footage of the white giraffes in their full splendor.

The serene creatures were seen near a patch of dry brush in Garissa County, Kenya. A young calf with pale white skin is seen near his mother that is also pale white from head to toe.

There were rumors that these giraffes roamed near the Ishaqbini conservancy. A group of rangers got a tip in June this year and finally came upon the rare creatures.

“We hurriedly headed to the scene as soon as we got the news,” the rangers wrote in a blog post. “And lo! There, right in front of us, was the so hyped ‘white giraffe’ of Ishaqbini conservancy! They were so close and extremely calm and seemed not disturbed by our presence.”

The mother paced back and forth in front of the rangers and signaled to the baby to hide in the bushes. This behavior is characteristic of wildlife mothers, the rangers said, and helps protect the young from predators.

The ranger observed the giraffes and noted that the baby had off-white spots more prominent than the mother. The mother in the meantime was entirely white.

“The question that lingered in my mind was if the fading on the skin was something that happened at birth or thereafter in the adult giraffe life?” a ranger wrote.

White giraffes have only been spotted twice before and never recorded on video until now. A white giraffe was seen in January 2016, in Tarangire National Park in Tanzania. The second sighting was reported in March 2016, in Ishaqbini conservancy in Kenya.

Experts believe that the giraffes are white due to a condition called leucism, which causes loss of pigmentation.

Most of the elders in the local community have never spotted white giraffes before and have mixed feelings about the mysterious animals.

“This is new to us” one community elder told the rangers. “I remember when I was a kid, we never saw them. It must be very recent and we are not sure what is causing it.”

The director of the local conservation program was stunned by the sight of the creatures.

“Nature is always stunning and continues to surprise humanity! These rare snow-white giraffes shocked many locals including myself but these gave us renewed energy to protect and save our unique wildlife,” he said.

“In this regard and in partnership with local communities, relevant authorities in Kenya and international partners, we promise to protect these beauties and their vital habitat,” he added. “We are also curious to know the daily whereabouts of these giraffes, so we will keep an eye on them.”