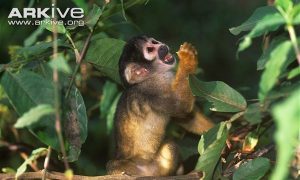 Francois’ Langurs are among the world’s scarcest monkeys, though their populations once flourished in both Vietnam and China. Among the unique facets of the dark-haired primates is that their babies are born with bright orange coats.

One bold-hued baby came into the world at Australia’s Taronga Zoo in early November. The little one is named Nangua, which is Mandarin for pumpkin, and has spent much of his life thus far cuddling with his mother.

He’s also getting to know the other females in the group as over time they will take on some of the monkey-rearing responsibilities. Among Francois’ Langurs, parenting as a community is common.

Though Nangua still teeters a bit when he walks, he has started to explore his new surroundings.