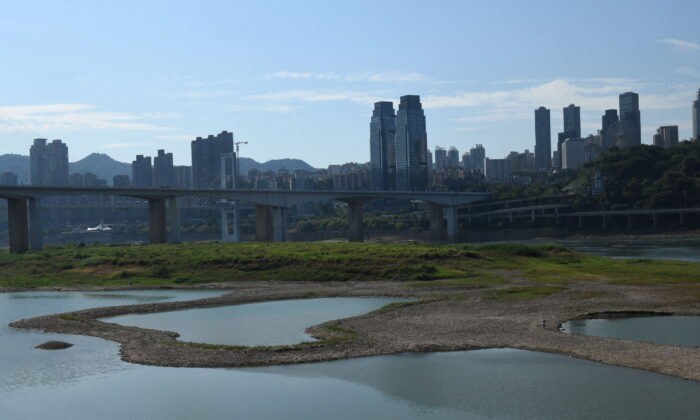 A view of the exposed riverbed of the Yangtze river in Chongqing, China on August 17, 2022. (cnsphoto via Reuters)
China Business & Economy

The extreme weather in August has triggered another round of factory shutdown in China. The record high temperatures and drought around the Yangtze River basin led to industrial power outages in southwestern Sichuan Province, and affected the supply chains of many photovoltaic, automotive battery, and material supplies companies.

The current wave of power cuts in Sichuan, which began on Aug. 15, was initially set to last six days, but then twice  extended to 15 days.

Silicon supply is expected to be more affected by power outages as polysilicon producers will need at least 10-15 days from shutdown to resumption and then to full capacity. The China Semiconductor Industry Association (CSIA) predicts that China’s polysilicon production in August will be 8 percent lower than expected.

According to a CSC Financial report in August, power outages caused by the drought mainly affected the two silicon production lines at Tongwei’s Yongxiang plant in Leshan, which can produce about 100,000 tons of silicon a year, and GCL Poly’s 30,000-tons-a-year production line at its Leshan plant. In addition, Tongwei’s silicon wafer production lines at Meishan, Shuangliu, and Jintang in the province were also affected, with a combined annual wafer capacity of about 65 gigawatts.

Other major impacts have occurred on the automotive, battery, and material supply chain.

Lithium is one of the most important raw materials for automotive battery production. Sichuan, a key province for lithium compound production in China,  has the largest reserves of spodumene in the country and accounts for nearly 30 percent of China’s total production capacity. With its rich lithium resources and preferential electricity pricing policy, Sichuan has attracted a large number of manufacturers of power batteries and battery materials in the past few years.

Chinese lithium giant Tianqi Lithium has a factory in Suining City in the province. Ganfeng Lithium, another lithium giant, has also signed an agreement to build a lithium compound production base in Xuanhan County of the province. Sichuan Yahua Industrial Group is one of the main manufacturers of lithium hydroxide and lithium carbonate in China. The province is also home to Shengxin lithium, Tianyi lithium, and others.

According to the Shanghai Nonferrous Metals Network (SMM), the first six-day power outage alone led to a reduction of 1,120 tons of lithium carbonate, 1,690 tons of lithium hydroxide, and 500 tons of lithium battery ternary materials in August, accounting for 3 percent, 8 percent, and 1 percent of the industry respectively.

The industrial power outages in Sichuan have already affected the supply and shipment of parts from Tesla’s Gigafactory in Shanghai and SAIC Motor. To solve the problem, the two factories sent letters to Sichuan authorities asking for priority to be given to their suppliers.

Toyota and Volkswagen’s joint venture plant in the capital Chengdu also suffered power cuts and was forced to halt production. Toyota’s Chengdu plant was forced to start its internal generators for to continue production.

Impact of the Drought in Sichuan

Sichuan is unique in two ways: it has a high reliance on hydropower, and a concentration of high energy-consuming enterprises.

The regime began slashing coal capacity in 2016 to limit coal production in all provinces. In Sichuan Province, the authorities used its abundant water resources to create a “hydropowered Sichuan.”

Driven by relevant policies, the energy structure of Sichuan has become increasingly monopolist. At present, the installed hydropower capacity has accounted for 80 percent of the total installed capacity in the province, while coal-dependent thermal power plants are basically reduced to backup power plants for peak regulating. However, in the event of prolonged and extremely dry weather, such as occurred this summer,  a shortage of electricity generation will occur.

In addition, photovoltaic and lithium compound production are all energy-intensive industries. In order to achieve a low-carbon production process in these industries, the authorities have been directing companies to concentrate in provinces such as Sichuan, which is rich in hydropower (green electricity) in recent years.

Ouyang Minggao, an academician with the Chinese Academy of Sciences, said at the World Power Battery Congress on July 21 that it is urgent to manufacture key materials for power batteries with low carbonization, and the solution is to use green electricity. Therefore, the trend of China’s power battery industry is to move to areas that have green power, and especially Sichuan.

The Sichuan authorities have also attracted a large number of battery material enterprises with a significant price discount. Suining City, for example, offers lithium battery and material manufacturers a preferential tariff of no more than 0.35 yuan per KWh ($0.05 per KWh), which is about half the price of industrial electricity in eastern China.

However, the energy structure that relies heavily on hydropower and the layout of high-energy-consuming industries that use green power intensively has revealed potential problems during years of super drought.

A new report shows that the frequency of droughts around the world has increased dramatically over the past two decades. According to the United Nation’s report “Drought in Numbers 2022” released in May, although droughts account for only 15 percent of natural disasters, the frequency and duration of droughts worldwide have increased by almost one third since 2000. From 1998 to 2017, droughts caused an estimated $124 billion in global economic losses.