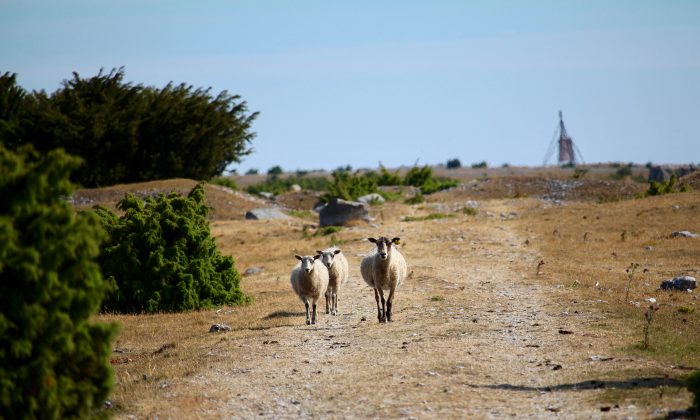 STOCKHOLM—Scandinavia has been hit by a historic drought after a record-breaking heatwave that hasn’t let up.

The situation is grave for farmers, as crops are failing and feed is so scarce that some will be forced to slaughter their animals.

Affluent Scandinavia is in no danger of famine, as might have been the case a century ago, but the drought has been consistently in the headlines, a sobering reminder of what extreme weather can do to food production.

After a long, cold winter with lots of snow and a spring that never seemed to get started, May saw an unprecedented heatwave. Very dry weather jump-started summer in a way that had people scratching their heads.

The average temperature in May broke records all over Sweden, sometimes going back to the 18th or 19th century when measurements began, the Swedish Meteorological and Hydrological Institute reported.

Irrigation and open burning were prohibited across Scandinavia, with several Swedish store chains even removing disposable barbecue grills from the shelves during the height of the season.

But the unusual heat and lack of rain would bring far worse problems than dry lawns and canceled barbecues. The current drought has been deemed the worst in decades.

That the drought came so early is also making things worse, especially for the grain harvest. Norwegian weather site Yr.no reported that the last drought of this magnitude struck Norway in 1947, but that was in July and August.

In Sweden, the Federation of Swedish Farmers (LRF) estimates that some 40 percent of the grain harvest has been lost, and farmers have begun to harvest a whole month earlier than normal, Aftonbladet reported. Even if July and August bring rain, the damage has already been done.

Slaughtering animals for lack of feed, a problem now facing farmers across Scandinavia, also brings problems in the longer term.

“If you have a couple of hundred cows, and you have to slaughter half of them, that takes time to recover from,” Lennart Nilsson of LRF said. “It’s very serious if we end up in that situation.”

Denmark, the southernmost Scandinavian country, has also seen unusually dry weather. The Danish Meteorological Institute (DMI) said that the drought in June was the worst for that month in a decade. Martin Merrild at DMI told Dr.dk that this is the worst crisis for the Danish farming industry in a century.

The fields are so dry that they risk catching fire during threshing, as happened in Denmark this week, TV2.dk reported.

Swedish Minister for Rural Affairs Sven-Erik Bucht said at a press conference on July 9 that Sweden is now engaged in a dialogue with the European Commission about getting crisis support from the EU for Swedish farmers.

Many people, including politicians, have been quick to link the drought to global climate change, but Markku Rummukainen, professor in climatology at Lund University, said it’s too early to tell.

“It takes time to ascertain that rare extremes, such as the drought in Sweden, are lasting changes,” he told the TT news agency.