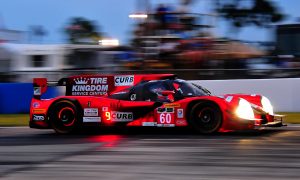 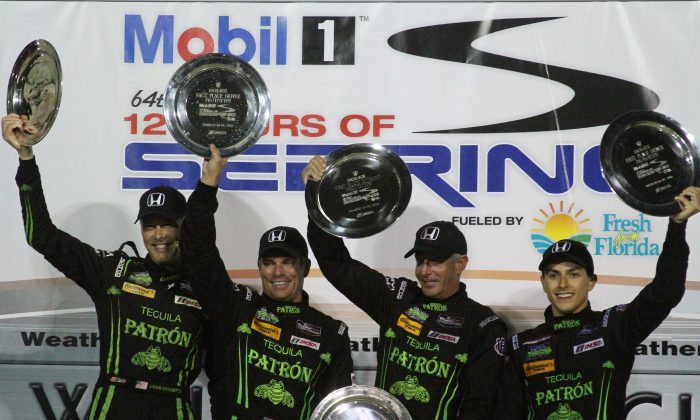 ESM won by speed and by strategy: the team opted to take tires under caution with 38 minutes to go, sacrificing the race lead for the hope of improved performance. The two Action Express cars took fuel only, choosing to stay on old rubber to gain track position—which paid off in the short term, as the #31 Action Express/Whelen Engineering Coyote-Corvette took the overall lead with the #5 AXR car second.

The race restarted with 30 minutes to go. ESM driver Pipo Derani began closing in on the two Action Express cars, but another caution, with 22 minutes left, seemed destined to spoil ESM’s strategy. However, quick work by the safety crew got the track clear for a restart with 13 minutes to go, giving Derani a slim chance.

The young Brazilian driver didn’t waste the opportunity. He caught and passed the Action Express car in Turn Seven on successive laps, taking the lead with only five minutes less in the race.

Once out front, Derani drove away, opening a gap of 2.9 seconds in the final three laps.

Corvette Racing repeated half its one-two Rolex 24 win at Sebring: Tom Milner brought the #4 C7.R home at the head of the GT Le Mans field, 2.8 seconds ahead of the #25 BMW Team RLL M6. The second Corvette lost 30 laps after colliding with the #911 Porsche North America RSR.

The #63 Scuderia Corsa Ferrari 488 GT3 held on the win the GT Daytona class by 2.3 seconds over the #96 Turner BMW, which finished six-tenths of a second ahead of the #44 Magnus Audi. Scuderia Corsa driver Alessandro Balzan passed Turner BMW driver Jens Klingmann nine minutes before the finish.

Core Autosport started from the Prototype Challenge pole, dropped to the back of the PC field, and fought its way back to the front, winning the class by 1.2 seconds over the #52 PR1/Mathiasen Oreca.