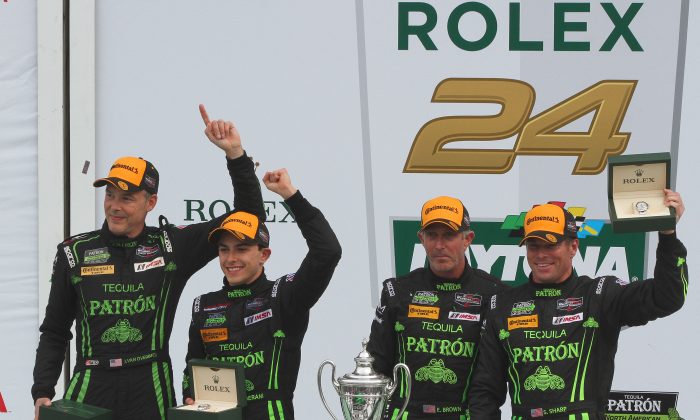 Derani also drove the closing stint for ESM. He was ten seconds behind the leader when he took over the Ligier-Honda. A dozen laps later he was back in the lead, where he stayed until the checkered flag waves two hours later.

The win was the first for ESM as a team, the first for Honda as an engine supplier, and the first for an LMP2 car. Team principal Scott Sharp had won the Rolex in 1996—itroniocally co-driving with Wayne Taylor, whose team ESM beat for the 2016 Rolex win.

The 2016 Rolex 24 was Pipo Derani’s first North American sports car race and his first with ESM. The 22-year-old Brazilian drove in the European Le Mans Series in 2014 and the World Endurance Championship in 2015, scoring a win at Spa-Francorchamps.

That experience surely helped him cope with the pressure put on him by by Wayne Taylor Racing drivers Ricky and Jordan Taylor and Max Angelelli. On top of that pressure, Derani had to cope with constant warning alarms telling him his gearbox temperature and power steering were about to fail.

Derani—and the rest of the team—had reason to be worried. ESM and one other team, Shank Racing, were using a new-to-the-series 3.5-liter Honda turbo V6, and Shank’s engine had blown up in the ninth hour while that car was leading the race.

“It was a little scary,” he said after the race. “I was just asking the car not to give up on me in the last 30 minutes.”

Derani decided to act as though the failures were in the sensors and not the mechanical systems, and to focus on managing the gap over his pursuers.

The young driver ultimately crossed the finish line 26 seconds ahead of Max Angelelli in the Wayne Taylor Racing Dallara-Corvette, and almost an entire lap ahead of the third placed-car. He set fastest lap of the race as a bonus.

ESM also took the lead in the North American Endurance Championship, a subseries within the WeatherTech SportsCar Championship.

Although they didn’t make much of it in the post-race press conference, illness affected three quarters of the Wayne Taylor Racing driving crew, particularly in the crucial final stints of the race.

Jordan Taylor had been fighting the flu for two weeks before the race, and was not feeling 100 percent on race day. His brother Ricky woke up race-day morning with some stomach ailment and he was also struggling while driving. Only last-minute addition Rubens Barrichello seemed to survive the race unscathed.

The team had originally planned to have Ricky hand off to Jordan ate in the race, but Jordan fklt unwell, complaining that a nauseating vibration and fumes in the cockpit were combining to slow his pace. The team decided Max Angelelli was the quickest—or healthiest—of the drivers and put him in for the final stint.

Whatever the reason—Jordan Taylor denied that there were any noxious fumes after the race—Max Angelelli barely made it through the final stint. He crawled out of the car and was immediately taken to the medical center and then to a hospital for observation.

After the race the Taylor brothers seemed to be blaming balance of Performance for the loss, rather than their ill health.

They pointed out that their team drove a flawless race—no accidents, no penalties, no mechanical problems (in fact the #10 Dallara-Corvette has never been to the garage during a race in all the seasons they have raced it at the Rolex)—while the winning ESM Ligier-Honda was penalized twice and still came back to make up a nine-second deficit in eleven laps.

Corvette Racing Fights to a 1–2 Finish in GTLM

WeatherTech’s GT Le Mans class always offwers excellent racing, and the class did not disappoint at all during the 2016 Rolex. The lead swapped between several different cars of several different makes, with the top five or six cars often within two seconds of each other.

Through much of the race the class lead was exchanged between the two Porsche North America RSRs and the Corvette Racing’s two C7.Rs. One of the Porsches lost time to drive train issues, leaving on car #912 to split the Corvettes.

Oliver Gavin, driving the #4 Corvette, somewhat controversially nudged aside Earl Bamber in the #912 Porsche, with 52 minutes left in the race. Gavin said he knew he had the quicker and better car, but couldn’t get past the Porsche, so, given the importance of the race and the limited time remaining, he used a bit of forceful persuasion.

Here had been a couple of spots where Earl was able to stop his car quicker than I was, and I just managed to miss him,” Gavin explained. One time, in Turn Five, I left my braking a little late and he opened the door just a tiny amount, so I just stuck my nose in.

“Yes, we had some contact and it nudged him wide.”

Antonio Garcia, behind the wheel of the #3 Corvette, also passed Bamber’s Porsche and set off after his team mate.

Once past the Porsche, Gavin radioed the pits to ask what would happen between the two Corvettes. Program manager Doug Fehan said the two cars could race clean and fair as long as they didn’t take each other out.

Gavin pitted, surrendering the lead to his team mate, then spent the next 35 minute driving all out in an effort to get it back.

Gavin retook the lead with 15 minutes left in the race, and managed to hold off his team mate, finally crossing the finish line thirty-four thousandths of a second ahead of his team mate.

The GT Daytona filed for the 2016 Rolex 24 was ridiculously deep and varied. Porsche and BMW each introduced a new GT3 chassis, and Lamborghini, a marquee which had never raced at Daytona before, was represented by five of its new GTS Huracans.

The Huracáns seemed nearly unbeatable. They were faster on the banking that all the rest of the GTD class, faster than the POCs, and faster than all the GT Le Mans cars.

Fortunately for the rest of the field, the two fastest Huracáns decided to wreck each other late in the night. Accidents and mechanical issues slowed some others, leaving the #28 Konrad Motorsport car to contend with.

Fuel was a concern for the entire GTD field in the closing minutes of the race. After all the calculations were done, all the engineers could say was that it seemed possible that the cars could finish without a splash.

Rene Rast in the second-placed #44 Magnus Racing Audi R8 decided to gamble. Fabio Babini in the class-leading Lamborghini was not so brave. When his car coughed on the back straight, BaBini decided to pull into the pits, surrendering the lead. Babini finished fifth in class.

Rast pressed on, choosing to risk finishing last on the chance that he might finish first—and the gamble paid off. The Magnus Racing Audi made it across the finish line and halfway around the track on its cool-down lap before it ran dry. The car had had enough fuel to finish and about a teaspoon more.

Rast and team mates John potter, Marco Seefried, and Andy Lally found themselves accepting Rolex watchwes in front of a cheering crowd.—for Rast, it was his first win in IMSA.

The IMSA WeatherTech SportsCar Championship continues its 2016 season with yet another internationally known endurance event, the Mobil 1 12 Hours of Sebring on March 19. Visit IMSA.com for details.