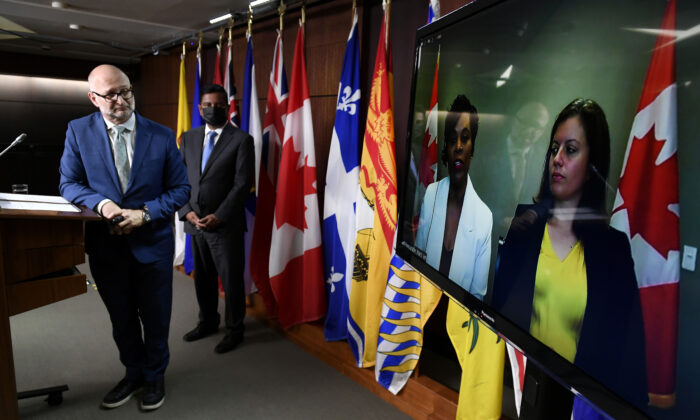 Minister of Justice David Lametti and Parliamentary Secretary to the Minister of Justice Gary Anandasangaree listen to Minister for Women and Gender Equality and Youth Marci Ien and Women's Legal Education and Action Fund’s Pam Hrick, as they appear virtually at a news conference on proposed amendments to the Criminal Code in response to a Supreme Court of Canada decision involving a defence of extreme intoxication, on Parliament Hill in Ottawa, on June 17, 2022. (The Canadian Press/Justin Tang)
Canada

The Senate voted Thursday to rubber-stamp the government’s extreme intoxication bill after the House of Commons rushed its passage yesterday.

Senators had adopted a motion Thursday afternoon to see Bill C-28 through all stages by the end of day.

As with the House’s similarly expedited process, the Senate motion provides for its legal and constitutional affairs committee to study and report on the issue by a deadline in March 2023.

The bill’s passage and its pending royal assent means that the Criminal Code will be amended to create criminal liability in cases of violent crime where the defendant can prove they were “in a state of negligent self-induced extreme intoxication.”

It is a response to a Supreme Court ruling in May that struck down similar language as unconstitutional.

Justice Minister David Lametti and Marci Ien, minister of women and gender equality, issued a statement after the bill’s passage, saying they were very pleased.

“The Criminal Code will now ensure that individuals who consume drugs and/or alcohol in a criminally negligent manner are held criminally responsible if they harm others while extremely intoxicated,” the statement read. “The coming into force of this legislation is an important step toward ensuring that our criminal justice system supports victims and survivors of crime — women, children, and Indigenous women, girls and 2SLGBTQQIA+ persons. It sends a strong message that will hold offenders to account and keep communities safe.”

The two said the Criminal Code “now clearly states that any person who voluntarily consumes intoxicants in a criminally negligent manner, becomes extremely intoxicated and harms others will be held criminally responsible for such acts.”

Lametti had called for its speedy passage so the gap in the law could be addressed before Parliament rose for a summer break.