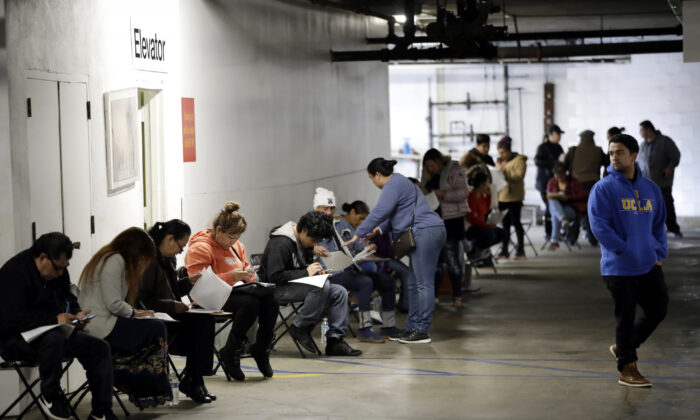 Some states are will issue an additional $600 per week for people on unemployment insurance amid the CCP virus pandemic.

These weekly payments are part of the $2.2 trillion package, known as the CARES Act, that was passed in Congress and signed into law last month.

The U.S. Department of Labor issued federal guidance to states on how to send out the extra money over the weekend, coming about a week after the package was signed, CNN reported.

For example, the Minnesota Department of Employment and Economic Development confirmed to local news outlet TwinCities.com that 11.4 percent of the state’s labor force applied for unemployment during the pandemic, and he added that Minnesota will become one of the first states to dole out an extra $600 per week.

“As soon as the CARES Act became law, our team at [Department of Employment and Economic Development] got to work putting the technology in place to support these payments and ensure that we were ready to get the money to Minnesotans in need,” commissioner Steve Grove said in a statement. “With a record number of unemployment applications, we know this is an uncertain and challenging time for many. It was critical that we act swiftly and provide this additional compensation without delay.”

In Georgia, that money will start going out starting next Monday, April 13, AJC reported.

“We’ll be ahead of most of the other states,” said Kersha Cartwright, spokeswoman for the Georgia Labor Department, told the paper. “We think we will be in the front pack.”

Authorities in New Jersey also confirmed that the new weekly payments will go out starting at the end of the week.

“We fully anticipate claimants will begin to see the $600 weekly supplement the end of this week, though that is not a guarantee,” said state Labor Department spokeswoman Angela Delli-Santi to NJ.com.

The New Jersey Department of Labor’s website, as of Wednesday, wrote that it has intended “to begin issuing the additional $600/week compensation the end of the week of April 5, for payment of week of March 29th benefits.”

Kentucky officials said the extra payments will be sent out starting on April 9.

Gov. Andy Beshear confirmed the development, saying the state has received the funding stream, according to WYMT.

Those who are eligible include those whose workplace was closed due to the public health emergency, a person who had to quit due to the Chinese Communist Party (CCP) virus, a person who cannot work because they’re a caregiver to someone whose school or facility was shut down, and a person who was slated to start a new job but it fell through or cannot get there due to restrictions caused by the pandemic.

Amid business shutdowns and layoffs, more than 10 million Americans have filed for unemployment insurance over the past several weeks, according to Labor Department data. Economists and analysis have said they expect that number to rise even further.