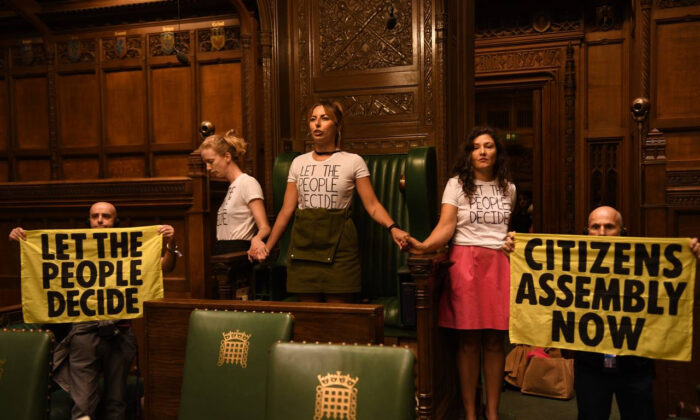 Climate activists from Extinction Rebellion have superglued themselves around the Speaker’s chair in the House of Commons chamber in London.

The group said around 50 activists were involved in the “non-violent” action at the Palace of Westminster.

A photo posted on the group’s Twitter account shows three members hand-in-hand in front of the seat while two other members held up signs. One read “Let the people decide” and the other noted “Citizens’ assembly now.”

Two of its members also used bike locks to chain themselves to the railings of the New Palace Yard entrance gates.

Both the House of Commons and the House of Lords are currently in recess, and lawmakers will not return to the Palace of Westminster until next Monday.

Extinction Rebellion said three of their members posed as tourists and joined an official tour of the building.

The group explained their demands in a post on Twitter: “Politics is too focused on short termism to tackle major issues like widespread inequality & the climate and ecological crisis. A citizens’ assembly would break the deadlock in Westminster, represent communities, & restore trust in politics.”

A spokesman for the House of Commons said: “We are aware of an incident on the parliamentary estate and are currently dealing with the situation as a matter of urgency.”

The Metropolitan Police said the force is “aware of a demonstration by a number protesters at the Palace of Westminster.”

A spokesman said: “Met police and parliamentary staff are responding.”

Extinction Rebellion and other climate groups have recently intensified their activities in the UK, causing disruptions to motorways and oil depots.

In April, the group blocked bridges in central London in order to put pressure on the government to speed up its climate change agenda.

Another group—Insulate Britain—who want the government to insulate every home in Britain in order to reduce energy use and carbon emissions—have repeatedly blocked the M25, the orbital motorway around London, and other roads in order to make their point.

Just Stop Oil, which demands the UK government end all new oil and gas projects in the country, began blockading fuel terminals on April 1, leading to over 1,000 arrests.

Home Secretary Priti Patel said on May 9 that the government is determined to stop protesters bringing Britain to a “grinding halt.” She said, “The law-abiding, responsible majority have had enough of anti-social, disruptive protests carried out by a self-indulgent minority who seem to revel in causing mayhem and misery for the rest of us.”