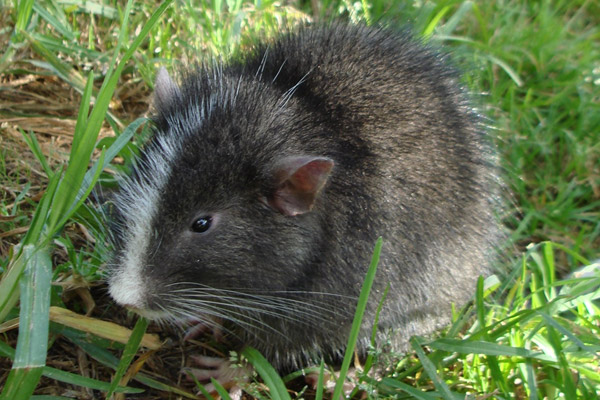 Below one of the most famous archaeological sites in the world, scientists have made a remarkable discovery: a living cat-sized mammal that, until now, was only known from fossils.

The Machu Picchu arboreal chinchilla rat (Cuscomys oblativa) was first described from two enigmatic skulls discovered in Incan pottery sculpted 400 years ago. Dug up by Hiram Bignham in 1912, the skulls were believed to belong to a species that went extinct even before Francisco Pizarro showed up in Peru with his motley army. Yet, all that changed in 2009 when a park ranger, Roberto Quispe, found what was believed to be a living Machu Picchu arboreal chinchilla rat near the original archaeological site. “In Conservation Biology this type of rediscoveries is called the Lazarus effect,” writes a team of Mexican and Peruvian scientists in a press release, who years later sought to confirm Quispe’s discovery.

The scientists—headed up by Horacio Zeballos the curator of the Department of Mammalogy at the Museum de Arequipa and Gerardo Ceballos from the Instituto de Ecología of the Universidad Nacional Autónoma de México—headed into the field in 2012 and tracked down the elusive mammal in the cloud forests near Wiñayhuayna, another archaeological site on the Inca Trail heading towards Machu Picchu. “Hard field work was conducted with the spectacular archaeological site as part of the landscape, on very steep hills, with slopes of up to 60 degrees of inclination, dominated by montane forests, with leafy trees covered with mosses, lichens and other plants,” the scientists write. In the end, they were able to find a living specimen, confirming that the Machu Picchu arboreal chinchilla rat actually never went extinct. However, Ceballos told mongabay.com that he believes the species is likely endangered “because [of] its rarity and habitat destruction.” He adds that, “large tracks of native forests have been destroyed because of agriculture and cattle grazing…in its extremely limited geographic range.” On the plus side, the species is found in both Machu Picchu National Park and the Historic Sanctuary of Machu Picchu. “Both the National Park and the Historic Sanctuary are relatively well-managed. They have staff and some infrastructure,” Ceballos said, adding that “it seems that the Federal Government has become more interested in reducing deforestation in the National Park and the Sanctuary in recent years.” But the Machu Picchu arboreal chinchilla rat wasn’t the only discovery the team made. In addition, the team believe they have uncovered at least six species new to science, including a new mammal, a new lizard, and four new frogs in the same area. “I am optimistic that the discovery of the [Machu Picchu arboreal chinchilla rat] and other new species will help to strengthen the protection of the native forests,” Ceballos said. This article was originally written and published by Jeremy Hance, a contributing writer for news.mongabay.com. For the original article and more information, please click HERE.