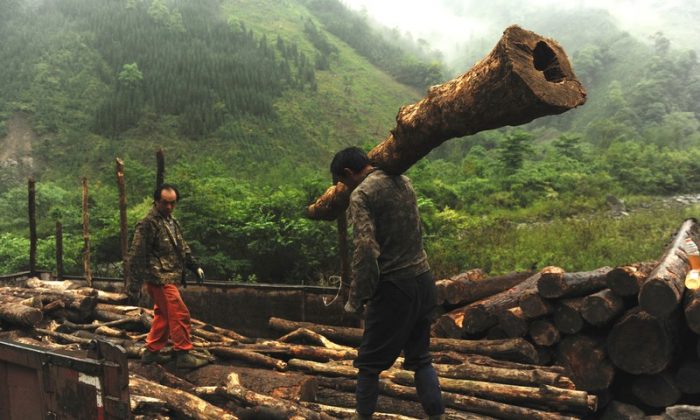 In the heart of the Giant Panda Sanctuaries in Sichuan Province, a shocking 3,200 acres, equivalent to 1,814 football fields, of natural forest have been felled since 2009 to make way for plantations that can be cut down for profitable timber.

Greenpeace, which published the findings in a report last week, said the area was part of the National Nature Reserves and the Panda Gene Flow Corridor. The stability of the corridor is critical for the connection and protection of the core population in the Fengtongzhai giant panda nature reserves, but forest clearance has created a number of holes in the panda habitat patch.

Ostensibly to create a “low-functioning” forest, the vast majority of the pristine forests that are home to rare wildlife are being razed to the ground with impunity, according to a post entitled, “Illegal Logging Is Threatening China’s Giant Pandas” by Wu Hao, a Forests Campaigner at Greenpeace East Asia.

The Greenpeace report indicated that in close proximity to these areas of natural forest clearance are a large number of panda activity points as well as nationally protected plants, such as the Chinese Yew and the Dove Tree.

A large number of panda habitats are located in close proximity to the deforested areas, which also contain rare plant life protected by Chinese law, including the Chinese Yew and the Dove Tree.

As a result, large areas of once natural forest are now manmade, artificial forests. In some areas, botched replanting has also undermined the protection of national first level plants. Loss of the mature forest that is rich in food resources poses great danger to the giant panda.

Wu Hao stated in his post that “the plantations that are replacing the clear cut forests can’t even come close to replicating the delicate, balanced, ecosystem that is essential for pandas to thrive in.” Greenpeace reported that low-functioning forest replanting has crossed China’s own most sensitive and fragile ecological red lines.

Other than the threat to the natural reserves, Greenpeace warned, natural forests are the most important factor in soil and water conservation, the cleared area will suffer increasing likelihood of post-earthquake secondary geological disasters such as landslides and debris flows.

In one case study, Greenpeace found that following the Lushan earthquake on April 20, 2014, the forest in Baoxing Xinhua Village (recognized in the late 19th Century as the place of origin of the giant panda) had been cleared in the name of “restoring earthquake-affected forest”. The clearing is connected to the Fengtongzhai national nature reserve.

Wu Hao wrote, “Our most recent expedition in June this year revealed that the destruction hasn’t stopped.”

The practice of clear cut deforestation in Sichuan is far from an isolated case. Previous Greenpeace investigations have uncovered similar activities in Yunnan (2013) and Zhejiang (2014) provinces, as stated by Wu Hao. “The forest reconstruction project is happening all across China.”

Greenpeace suggested that loopholes in the management of forests were the root causes of destructive, large scale natural forest clearance and conversion. For instance, the standards of “low-function” were ill-defined. Also, a number of parties have carried out expansions of the project to maximize profits, in violation of environmental regulations.

The State Forestry Administration of China, has responded to Greenpeace concerns, saying that the local forestry department has been instructed to conduct an investigation about the report, China News reported.

Chinese dissident Zheng Yi told Radio Free Asia in a telephone interview that in addition to the policy loopholes, “there are certainly things that we have heard so often, such as the collusion of business interests, and the relevant departments turning a blind eye.”

A netizen calling himself “mountaineer” commented on the China News article, saying that “20,000 Mu (about 3,200 acres) of deforestation is not merely illegal logging, but something like open banditry. Those who have no connections in high places would not dare to engage in such rampant and illegal acts in broad daylight.”