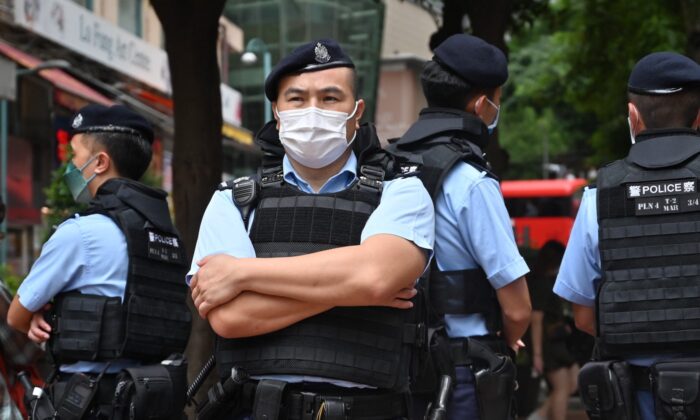 Police stand guard in the Causeway Bay district of Hong Kong on June 4, 2022, near the venue where Hong Kong people traditionally gather annually to mourn the victims of China's Tiananmen Square crackdown in 1989 which the authorities have banned. (Peter Parks/AFP via Getty Images)
HK Current Affairs

The Hong Kong government recently published a 268-page consultation paper on a legislative proposal aimed at extending jurisdictions to information and communications technology.

However, experts have warned that the proposal, which they see as on par with Hong Kong’s national security law, could be used by the Hong Kong government to set up mass internet surveillance and censorship over its citizens.

The consultation paper, published July 20, reiterated the importance of the national security law and proposed having jurisdiction over five categories of cyber-dependent offenses. Furthermore, such jurisdictions would have an effect in extraterritorial cases if they are related to Hong Kong affairs.

The consultation paper, drafted by Hong Kong’s Cybercrime Sub-committee, also states that interception, interference, access, disclosure, and use of data without lawful authorization or reasonable excuse would be a criminal offense under the new proposal.

In an interview with Radio Free Asia (RFA), Wong Ho-wa, data scientist and founder of the Internet Society Hong Kong (ISOC HK), expressed concerns over the clauses within the consultation paper.

In particular, Wong emphasized that “illegal use or possession of data” is an incredibly broad term, and it is boundless as to whom and what it could pertain to.

“This is very frightening; the public is bound to be afraid of how this will be implemented, with such broad definitions,” he said. “Even people who supply equipment could be targeted, say for selling routers or servers to others.”

Sang Pu, a current affairs commentator, told RFA that the new proposal could be seen as an extension of Hong Kong’s national security law.

“They are extending their controls using computers and cybercrime as a pretext,” he said. “I am very worried that this will lead to internet blocks and censorship, and all of the AI censorship and keyword search term censorship we see in [mainland] China being implemented in Hong Kong.”

Sang further stated that although this proposal is still in the consultation stage, it will likely pass in the Hong Kong legislature with tightened controls down the road.