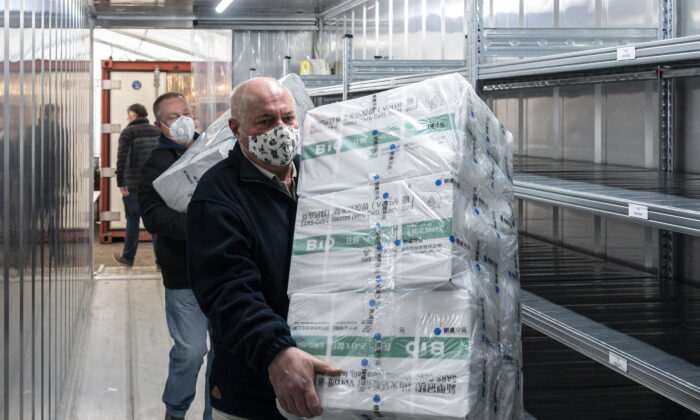 Employees unload the newly arrived coronavirus vaccines from Chinese pharmaceutical company Sinopharm at the logistics base set up to in the parking lot of the government office in the 13th district of Budapest, Hungary, on March 3, 2021. (Zsolt Szigetvary/MTI via AP)
INSIDE CHINA

The export of Chinese-made COVID-19 vaccines has dropped significantly this year due to its low effectiveness, especially against new mutations of the virus, hampering the Chinese communist regime’s campaign of “vaccine diplomacy.”

At the end of 2020, when the world urgently needed COVID-19 vaccines, China launched its vaccine diplomacy by providing a large number of Chinese vaccines to low- and middle-income countries in Asia, Latin America, Africa and Eastern Europe.

However, according to the United Nations Children’s Fund (UNICEF), the export of COVID-19 vaccine developed and produced by three Chinese companies, Sinopharm, Sinovac, and CanSino dropped to 6.78 million doses in April 2022,  a 97 percent decrease from its peak in September 2021.

As of December, the total export volume of China’s vaccines was still as high as 199 million doses. This was boosted by increased transactions on the global mechanism for equitable access to COVID-19 vaccines (COVAX) platform. This year, China’s vaccine exports have plunged, shrinking sharply in the first three months. China is no longer a major supplier on COVAX.

According to Airfinity, a British data analysis company, many people who were inoculated with Chinese vaccines for the first two doses in some countries have chosen Pfizer, AstraZeneca, or Moderna for booster shots. Among people who received the Chinese vaccine for their first dose in Pakistan, Indonesia, Bangladesh and Brazil, the percentage of them taking the Chinese vaccine as the third dose decreased by 98 percent, 93 percent, 92 percent, and 74 percent respectively.

Walid Kassem, a Lebanese researcher, told Radio Free Asia: “As a diplomatic tool between China and African and Middle Eastern countries, the Chinese vaccine has been welcomed by the people of these countries from the very beginning, but the situation has changed.

“Firstly, Chinese vaccines’ effectiveness is far lower than the 92 percent – 97 percent effectiveness of the Western vaccines, which has led many countries to denial [sic] the approval of the Chinese vaccines. Secondly, the Western vaccines have already been available on the market and on the COVAX platform, so developing countries now have enough vaccines.”

“In Lebanon and other Arab countries, many people refuse to take Chinese vaccines because they trust the West more. The recent outbreak in Shanghai has further exacerbated people’s distrust towards Chinese vaccines,” Kassem added.