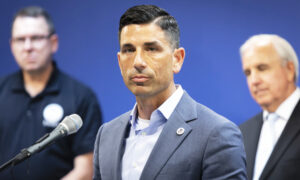 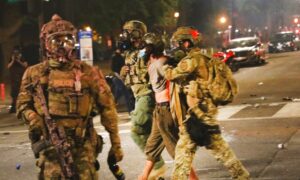 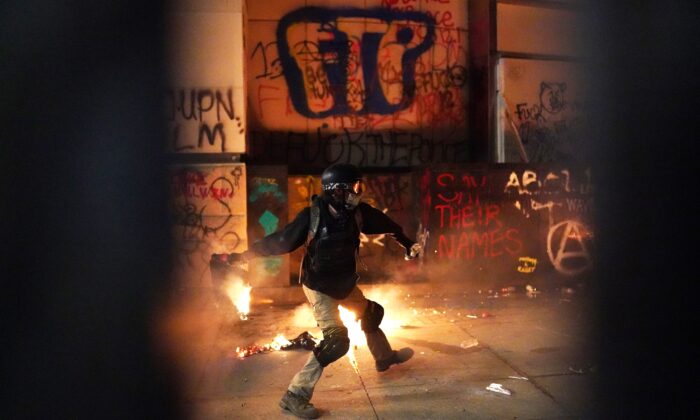 A rioter threw an explosive device at a federal courthouse in Portland early July 28, causing a detonation that could be felt more than a block away.

Rioting in Portland has continued on a nightly basis since late May, with support from city and state officials.

The explosion—which left onlookers stunned—took place around 12:12 a.m. The crowd was trying to take down the fence erected last week to protect the Mark O. Hatfield Courthouse. Suddenly, the device exploded, causing a loud boom.

“What the [expletive] was that?” one onlooker said.

“A person threw a Molotov cocktail, or similar destructive device, against the front door of the courthouse which burst into a fireball when it struck the building causing a report to be heard and felt more than a block away,” the bureau said.

“The crowd activity continued as before,” it added.

In the hours leading up to the explosion, hundreds of people wearing gas masks and helmets gathered outside the courthouse and resumed their ongoing bid to topple the fence. They brought signs, hockey sticks, golf clubs, umbrellas, leaf blowers, and fireworks. They hurled rocks, bottles, and other objects, like the explosive device, at the building, and started a fire inside the fence, adding wood, garbage, and other debris to stoke the flames.

Before authorities put up the barrier, rioters set fires to the courthouse. They ripped off plywood and smashed windows.

If DHS and the U.S. Marshal’s Service see rioters stop trying to damage the courthouse, “then the officers will go home,” Gabriel said, adding, “I think, not to be flippant about it, but I think it’s that simple.”

So far, rioters have not stopped.

After multiple warnings to disperse were ignored, federal officers used tear gas and other crowd control munitions to move the crowd away from the courthouse. Portland police officers were not involved.

The crowd dispersed around 1 a.m.

Hours before the latest riot started, two Portland commissioners said they want to meet with Acting DHS Secretary Chad Wolf to discuss a “cease-fire” and the removal of federal forces from the city.

The Department of Justice, meanwhile, announced 22 more people are facing federal charges for participating in the riots over the weekend.

The defendants are facing charges including assaulting officers, failing to obey lawful orders, and operating a drone in restricted airspace.

Since early July, 74 people have been arrested by federal officers, and 60 have been charged.

Isabel Van Brugen and Ivan Pentchoukov contributed to this report.