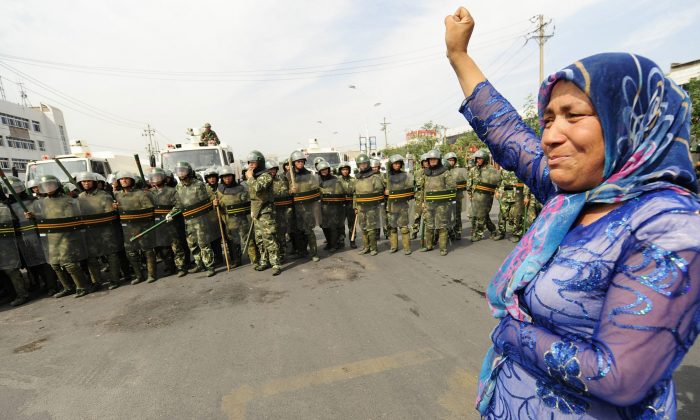 Three explosions, one after another, shook Xinjiang on Sept. 21, killing two people and injuring at least half a dozen more, according to media reports and sources.

The explosions took place at around 5 a.m. in Luntai County, in the city of Korla, about six hours southwest of Urumqi, the capital of the Xinjiang Uyghur Autonomous Region. Xinjiang is the home of the Uyghur muslims, a Turkic people who have for years bristled at what they consider Beijing’s interventions into their religious and cultural life. In recent years that resistance has become increasingly violent.

Tianshan Net, the official media platform of the Xinjiang government, reported that two people were killed, and “many” injured. “Public security officials have been dispatched to deal with the matter,” the statement said. The official announcement consisted of only three sentences.

Some residents in Luntai County reached by telephone were unwilling to talk to reporters, apparently fearful of retribution by the authorities for discussing sensitive political information. Others offered that two of the explosions took place near military installations, suggesting that Chinese military personnel were the targets.

One of the explosions took place near a farmer’s market at Yangxia Town, said a local resident who lived closed by and heard the explosion, according to Radio Free Asia. He said the death toll was at least 20 to 30 people, though it was unclear how the resident knew the death toll.

“Police officials from the Chinese regime are among the casualties. The official media only reported two deaths, but many were critically injured in hospital,” said Dilshat Rexit, a spokesperson for the World Uyghur Congress, in a telephone interview. “After the incident, Internet and cellphones were strictly monitored to prevent the truth from getting out.”

Rexit added that the Communist Party’s high-pressure clamp down on religious and cultural life in the area forms the backdrop to the current violence.

“The Communist Party’s own policies are leading people to resort to violent measures to preserve fairness and dignity,” Rexit said. “The authorities should wake up from the dream of achieving stability with suppression—showing an ounce of sincerely and change its policy to meet the fair requests of the Uyghurs. Extreme suppression will only lead to extreme opposition.”

Mr. Chang, a local Han resident, told Epoch Times in a telephone interview that southern Xinjiang, which includes Luntai County where the explosions took place, has comparatively more military and security officials than elsewhere in Xinjiang. But despite the military presence, violence in the region shows no signs of abating.

“The high-pressure technique since May by the authorities has been shown to be a failure…Violence is escalating and now coordinated explosions show that more people are involved. The Communist Party must review its policies,” Mr. Chang said.

On Sept. 22, the day after the recent explosions, 17 officials from Yarkant County, Xinjiang, including He Limin, Party chief of Yarkant County, Chen Qiang, secretary of the Politics and Law Commission, and Hu Biao, the Public Security Bureau chief, were all disciplined for their failure to stop explosions in that area on July 28, and in the nearby Kashgar City on July. 30.

“The Communist Party is simply shedding responsibility,” said Rexit, in response to the news. “This will cover up the actual number of deaths in Yarkant County.”

Written in English by Frank Fang.