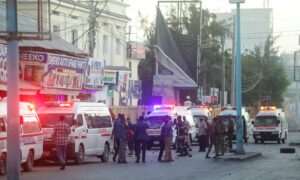 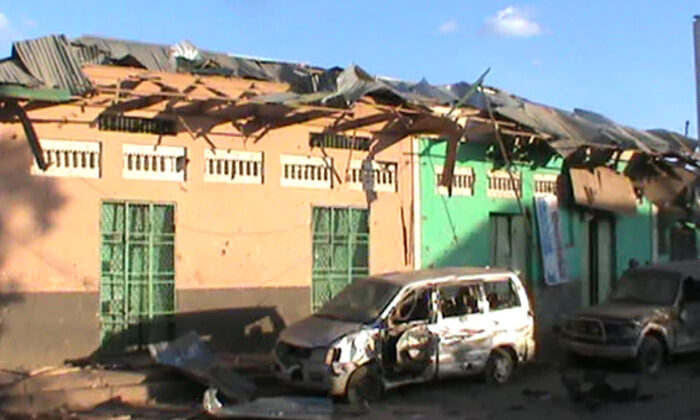 Destroyed buildings and vehicles after twin explosions in the Somali city in Baidon on Feb. 28, 2016. (AFP via Getty Images)
Africa

MOGADISHU, Somalia—A suicide bomber detonated his explosives outside a cafe in Somalia’s city of Baidoa on Saturday, killing at least four people and wounding more than six others, police said.

The bomber was targeting the Bay region governor, Ali Wardhere, who was outside the Suez Cafeteria, officials reported. The governor escaped the explosion unharmed, according to the official government news agency, SONNA, which reported that at least two of his bodyguards, who were also policemen, were among the wounded.

“The explosion which was heard all around the town of Baidoa has terrorized the people and had created a momentary confusion,” said Amin Maddey, who witnessed the explosion and spoke to The Associated Press by telephone.

The al-Qaida linked group al-Shabab has claimed the responsibility through a report they published on their website and radio Andalus which advocates for their jihadist campaigns.

“The target was a convoy accompanying Mr. Ali Wardhere, the governor of Bay region, which was hit hard,” the al-Shabab statement said, “three of Ali Wardhere’s bodyguards have died in the attack and the target which was Ali Wardhere himself got wounded,” added the statement.

The police have cordoned off the area for investigation as many bystanders gathered around to check whether their family members or friends are among the victims.

Meanwhile, another explosion went off in the Huriwa district of Mogadishu Saturday, killing one government soldier and wounding a bystander, police said.

It is not known whether the two explosions in Baidoa and Mogadishu are related. No one has yet claimed responsibility for the bombing in Mogadishu.

The people of Somalia are seeing major security lapses as leaders remain in deadlock over the political situation after elections were delayed earlier this year.

“The meeting between the federal government and the federal member states has ended in total failure,” said the Minister of Information, Osman Abokor Dubbe, who blamed the two leaders of Puntland and Jubbaland for that failure.

However, both leaders of Puntland and Jubbaland have denied reports of a failed meeting.

There have been fears that the al-Qaida-linked group would be emboldened by Somalia’s current political crisis as President Mohamed Abdullahi Mohamed is under pressure to step aside.