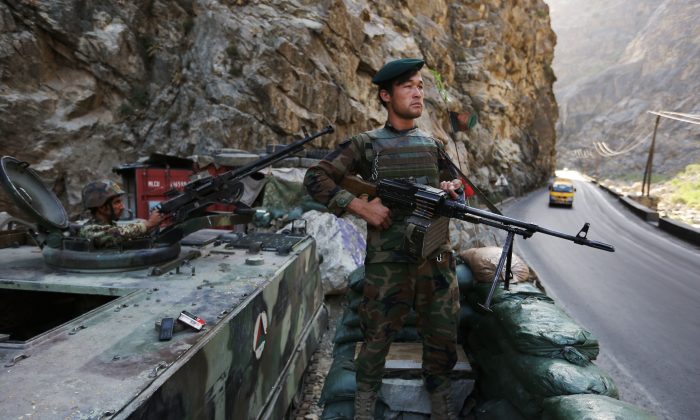 An Afghan soldier guards a checkpoint on the Kabul-Jalalabad highway on the outskirts of Kabul, Afghanistan, on July 19, 2016. (AP Photo/Rahmat Gul)
Middle East

The BBC reported that the blast hit at around 1:25 a.m. local time, and it was heard throughout the capital city.

Electricity in parts of Kabul had been cut off before the explosion, the BBC report said.

Injuries and deaths have not been confirmed. The cause of the explosion is also unconfirmed.

On social media, users said they felt the blast and noted that the power in parts of the city had been cut.

#AFG That was a huge bang. A huge explosion shook Kabul city. The electricity went off right before the blast.

The lights went out first then the blast was heard in PD10. https://t.co/W3ZAmrOLcE

The explosion comes as a senior official said that 24 police officers have been killed in the past two days in Afghanistan.

Kareem Atal, the director of Helmand’s provincial council, said that battles between government forces and militants have been raging in the Kanashin district since late Friday, when the Taliban took control.

The fighting has spread north to other districts, where militants are targeting checkpoints and have killed at least seven policemen, he said. The police and government compounds in the Nad Ali district have been surrounded by insurgents, Atal said. Taliban fighters are also trying to close key highways across the province.

Atal said that the police—who also fight on the front lines in Afghanistan’ relentless insurgency—had received no help or backup from other branches of the security forces, including the army.