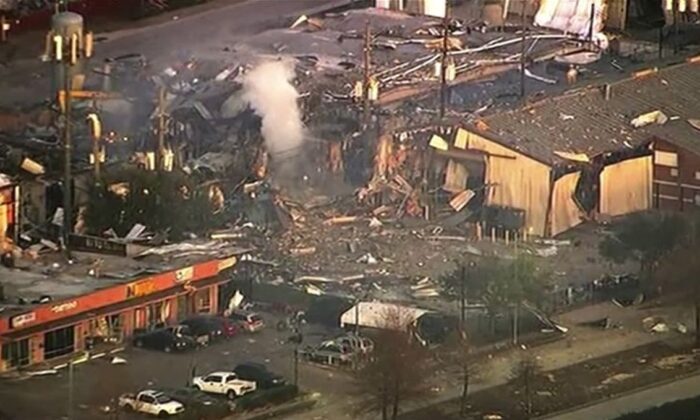 This aerial photo taken from video provided by KTRK-TV shows damage to buildings after an explosion in Houston on Friday, Jan. 24, 2020. A large explosion left rubble scattered in the area, damaged nearby homes and was felt for miles away. A fire continues to burn and people have been told to avoid the area. (KTRK-TV via AP)
US News

A building explosion was reported in northwestern Houston on Friday morning, according to the Houston Police Department.

In an update at around 10:45 a.m. ET, at least two people died in the blast, fire officials said. A strip mall and homes were heavily damaged, Houston Fire Department spokesman Samuel Pena said in a news conference.

The blast was reported near a manufacturing and distributing area along 4500 Gessner Road.

Houston Police Chief Art Acevedo wrote there was a “debris field out here is about half a mile. No inhalation known hazard.” He told CNN that one person was accounted for.

KHOU, citing fire department officials, reported that one person was hospitalized. They were identified as a local homeowner.

There is an increase of “flames and small explosions at plant,” Acevedo wrote, adding that locals need to “avoid exposure” until further notice.

“Until further notice avoid inhalation exposure out of over abundance [of] caution,” he wrote later. Schools in the area might be “impacted by this explosion this morning,” he said, adding that parents need to “check with the school district before you head out to class in the area.”

A fireball caused by the explosion apparently rose from the blast, according to footage posted online.

Officials told KHOU that polypropylene, which is used in the manufacturing of plastics, was released during the explosion. The City of Houston wrote that it quickly dissipates in the air.

Crews haven’t been able to access the facility to turn it off, meaning that more polypropylene will be emitted, the station reported.

Increases flames and small explosions at plant continue per @houstonpolice airship. Please avoid exposure if at possible until further notice.

“In an abundance of precaution, students will remain indoors at nearby schools due to air quality concerns. We will continue to monitor the situation and provide updates on the website and social media as they become available,” Cy-Fair said in a statement to the station.

Spring Branch wrote on Twitter that its facilities are “fine as of this time,” and it said its school will remain open on Friday.

On social media, some locals who live miles away said the explosion woke them up in the early morning hours.

It’s not clear what caused the explosion.