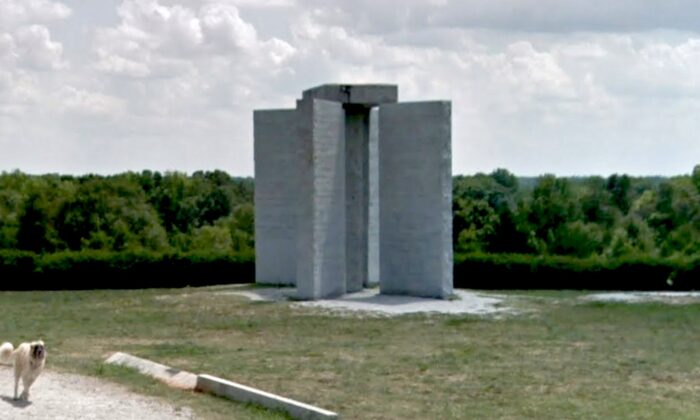 The Georgia Guidestones in Dewy Rose, Ga., in July 2016. (Google Maps/Screenshot via The Epoch Times)
Crime and Incidents

Explosion Reported at Georgia Guidestones, Which Calls for Much Smaller Human Population

A significant explosion was reported at the Georgia Guidestones on Wednesday morning, a mysterious Stonehenge-like monument that called for keeping the world’s population under 500 million, according to officials.

An early morning explosion “destroyed a large portion of the structure” that is located in Elbert County, according to the Georgia Bureau of Investigation in a statement. “The preliminary information indicates that unknown individuals detonated an explosive device at around 4:00 a.m. on Wednesday, July 6th,” the statement continued.

Video footage and photos of the incident show portions of the granite structure in ruins.

Crews came to level the remaining standing parts of the structure in the evening, reported 11Alive.

Built in 1980 in rural Elbert County, the Guidestones are a megalithic-inspired monument that called for the world’s population to remain under 500 million. It’s not clear who exactly built the Guidestones, and public records say that a man named Robert C. Christian, or R.C. Christian, had them constructed on behalf of a “small group of loyal Americans.”

The stones should be capable of “withstanding catastrophic events” and would serve as a compass, calendar, and a clock, according to a Wired magazine article published in 2009.

As for the messages, some have speculated that they advocate for eugenics, population control, globalism, and a worldwide government. The first two messages say: “Maintain humanity under 500,000,000 in perpetual balance with nature, guide reproduction wisely—improving fitness and diversity,” and “unite humanity with a living new language.”

Wyatt Martin, president of the Granite City Bank—which helped construct the Guidestones—said he was the only one to have met Christian in person. Martin told the magazine that Robert Christian wasn’t his real name and the man had told Martin to destroy all records and documents related to the project, and not disclose that information to anyone else.

“This fella showed up he was wearing a very nice, expensive suit, which made me take him a little more seriously. And he was well-spoken, obviously an educated person,” Martin told Wired.

Martin said that his group, which was not named, had been planning the Guidestones in secret for 20 years and wanted to always remain anonymous.

“And when he told me what it was he and this group wanted to do, I just about fell over,” Martin said. “I told him, ‘I believe you’d be just as well off to take the money and throw it out in the street into the gutters.’ He just sort of looked at me and shook his head, like he felt kinda sorry for me, and said, ‘You don’t understand.'”

Martin also said that “Robert Christian” had the funds and ability to charter a private plane and wanted to spend that weekend scouting locations from the air, according to the interview.

“He said he was going to send the money from different banks across the country,” Martin added, “because he wanted to make sure it couldn’t be traced. He made it clear that he was very serious about secrecy.”

So far, no individual or organization has come forward to take responsibility for commissioning the building of the Guidestones.