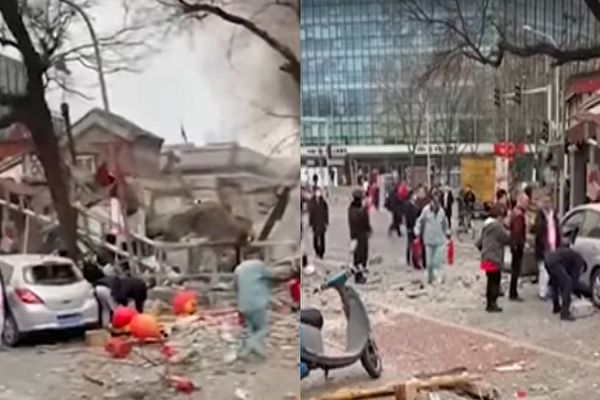 Screenshot of an online video showing the aftermath of an explosion at a restaurant in Xicheng district, near Zhongnanhai, the CCP's headquarters, in Beijing, on Feb. 23, 2021.
China Society

Explosion Occurs at Restaurant Near Government Headquarters in Beijing

An explosion leveled a restaurant in Beijing and left several people injured, raising security concerns ahead of a major political gathering of China’s political elite next week. However, the story was immediately removed from all media outlets in the mainland due to the sensitivity of the matter. The Epoch Times interviewed the wife of the restaurant owner.

On Feb. 23, an explosion destroyed Defeng Restaurant and a house that was attached to it. Among the seven people injured, two were in critical condition, and all were sent to the hospital for treatment, according to China’s state broadcaster CCTV. The cause of the explosion is unknown.

The blast drew immediate attention because the restaurant was situated near Zhongnanhai, the CCP (Chinese Communist Party)’s headquarters in Beijing, from which it was only 650 meters away, Radio Free Asia reported. The timing of the incident is also sensitive because it occurred a week ahead of the “Two Sessions,” the main annual political gathering of China’s top leaders, which will start on March 4.

On the afternoon of Feb. 24, The Epoch Times learned from the wife of the restaurant owner that the family had just returned to Beijing from visiting family in their home province of Sichuan for the Chinese New Year. The wife requested to remain anonymous due to security concerns.

She said that her husband received a call from the local police station on the morning of Feb. 23.

“At that time, our whole family was scared to death. My husband rushed over to the site,” she recalled.

“It was a very bad explosion. We were barred from entering. We were told it was dangerous to walk in. Our losses are heavy. One or two hundred thousand yuan, I guess.”

The woman wasn’t sure what caused the explosion. “We ordered one gas cylinder. At most two cylinders can be kept at the same time. We can’t figure out why the explosion occurred … we’re in such a mess.”

When asked about the casualties, she replied: “I don’t know if there were any deaths. When we got to the site, the injured had already been carried into the ambulances.”

The woman said that they are expecting to be summoned by the local authorities for questioning at any time because the incident is a delicate matter. “Mostly because it [the restaurant] is so close to Zhongnanhai and the [Two] Sessions will be held very soon,” she said.

“Now we’re incredibly nervous and dare not go anywhere. They may call us for information at any time,” she added.

The Epoch Times has discovered that CCTV and other state-run media outlets, including news portals Sohu, NetEase, Sina, and The Paper, took down the story. Chinese social media platform Weibo may have also removed the story because a keyword search on the topic yielded no results.

Xiao Lusheng and Hong Ning contributed to this report.