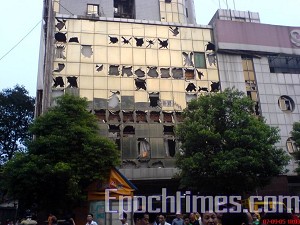 On September 5, 2007, an explosion occurred in Zhuzhou City, Hunan Province. Glass fragments covered the site of the explosion. Some areas were covered with blood stains and remaining body parts. (The Epoch Times)
China

Explosion in Zhuzhou City Kills At Least One, Injures Five

At 6 p.m. on September 5, an explosion on the south side of Jialun Square near the Computer City on Jianshe Road South in Zhuzhou City of Hunan Province killed at least one and injured five people. Glass fragments covered the site of the explosion. Some areas were covered with blood and body parts.

Local residents told The Epoch Times that after the explosion, authorities had censored information regarding the blast, refusing to disclose the exact number of casualties, the cause of explosion and even the location of the explosion. The authorities were also reported to have increased Internet surveillance in an effort to censor any Internet postings about the incident. Several BBS forums were blocked. Local media published only summary news briefs without details.

A staff member at the Zhuzhou Municipal Public Security Bureau claimed to be uncertain as to the cause of the explosion and the exact number of casualties. “Wait for the government's notice or take a look at the local media report, we cannot tell you anything,” said the staff member.

Mr. Liu, who works at the Blue Sea Internet Café, said, “Every media reported the same details as if they had all come from one source. They said the explosion happened at the entrance to the Computer City, with one dead and five injured. Other than that, they simply reported how the government had handled the cleanup.”

“Actually the explosion took place at the Jialun Square, which is about 150 meters north of the Computer City,” said Mr. Liu. “It was not at the Computer City. The exact location may have been at the entrance to the bedding market.”

Mr. Liang, who works at the Computer City, said “My wife was really worried after hearing the news. She called me again and again as she was afraid something might have happened to me. The damage at the Computer City was relatively minor. Only 20 windows were broken. At the time of the explosion, I felt that the building was shaking as if there had been an earthquake.”

“The majority of the photos I have given you were taken in the building at the Computer City, so it proves that the explosion did not take place at that location,” said Mr. Liang.

“An eyewitness I spoke with had seen at least four people dead and many seriously injured,” said Mr. Liu. “I heard that an Internet café had over 20 people injured or killed.”

“The windows on the Commercial Bank across the street were all broken,” said Mr. Ma, who works at the Computer City. “The whole street was covered with glass fragments. Within 100 meters of the explosion, teeth, eyeballs, feet and internal organs of the dead were scattered all around. The windows on a bus were shattered. Many passengers on the bus were cut by the broken glass. Ambulances were full of injured people.”

Several residents said that the police had censored information regarding the cause of the explosion.

“Some people were saying that the explosion was set off deliberately,” said Mr. Ma. “Others said it was due to the explosion of an oxygen cylinder during construction. Still others were saying there was a casino or an Internet cafe or a home textile business there; perhaps it was due to an explosion of the marquee lighting. Some were even suggesting it was related to the development of the property. It is hard to say, you will have to go to the Zhuzhou police to discover the exact cause. It might have something to do with the behind-the-scene politics between bureaucrats and businessmen.”

“The truth is hidden among the people,” said Mr. Liang. “The authorities' overall objective is to minimize publicity. Regardless if the issue is big or small, the authorities will always censor information, and the media has always been playing it down or covering it up.”