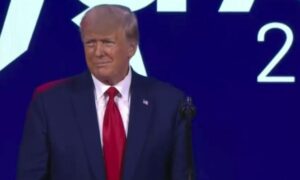 Trump Charts Path Forward for GOP at CPAC: 'We will be victorious and stronger'
0
Share Now
TelegramFacebookTweetEmailTellMeWeReddit
Copy Link
US

An explosion was reported in downtown Houston amid heavy flooding, according to local media reports on Monday, Aug. 28.

Footage of the incident shows a raging blaze, with flames leaping out windows.

One firefighter was injured while trying to put out the fire, KPRC reported.

It’s unclear how the fire started.

It’s also unclear if there were any casualties.

On Friday, Hurricane Harvey slammed into southern Texas, inundating Houston and surrounding areas with floodwater. At least five people have died, officials said, adding that the number is likely to rise.

“We’ve made significant investments,” Dr. Umair Shah, who is the executive director of Harris County’s public health department, told The New York Times Sunday. “The challenge is until it unfolds there’s so many moving pieces and it’s never the same as the situations you’ve previously encountered.”


FEMA, meanwhile, said that some 30,000 people will be moved to shelters.

Louis Uccellini, director of the National Weather Service, noted that some areas of southeast Texas around Houston have experienced more than 30 inches of rain. “We are seeing catastrophic flooding, and this area is likely to expand,” Uccellini said, as per USA Today.