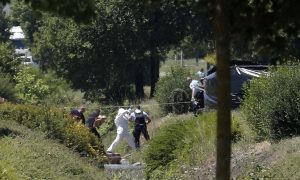 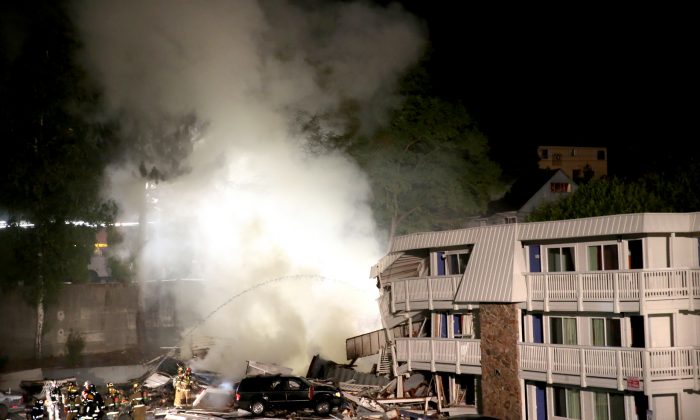 Firefighters cool down hot spots after an explosion at a Motel 6, Tuesday, Aug. 18, 2015, in Bremerton, Wash. (Larry Steagall/Kitsap Sun via AP)
US

SEATTLE—An explosion demolished part of a Motel 6 in Bremerton, Washington, critically injuring a gas company worker just minutes after the acting hotel manager had evacuated the building due to a leak.

Bremerton Police Chief Steve Strachan told The Associated Press there were no reports of anyone missing following the blast Tuesday night, but fire officials planned to go through the rubble carefully to make sure.

“There are no reports that anyone was inside, but we can’t say with certainty that everyone was evacuated,” Strachan said. “The management did a really good job of getting the alarm in right away and getting the evacuation started. We’re very thankful there weren’t more injuries.”

Manager Tonya Hinds said in a telephone interview that a passerby had come into her office to say a gas line was leaking at the back of the building. Hinds — a former volunteer firefighter — said she went outside and saw that the leaking line was a big one “with a lot of gas.”

“I pulled the alarm and started corralling people away from the building,” Hinds said. “I wanted to make sure all my guests were out.”

Bremerton is located west of Seattle, across Puget Sound.

The alarm came in just before 8 p.m., and the fire department and two Cascade Gas employees responded. The explosion came half an hour later, and one of the gas company workers was critically injured and flown to Harborview Medical Center in Seattle, Strachan said.

Police said some firefighters at the scene were blown back 20 feet by the force.

Flames continued burning hours later, but Strachan said that was just the gas burning off from the line as the responders tried to get it shut off entirely.

The motel, which reopened last fall after an extensive remodel, had about 65 guests in 42 occupied rooms, and the blast destroyed about one-quarter of the building, Hinds said. She said that one guest reported having seen someone jump out a window of the three-story establishment and land on or near the gas line just before the leak.

The Red Cross was responding to find the guests alternative housing, Strachan said.