Explosion Caught on Video Shatters Paper Mill, No One Hurt 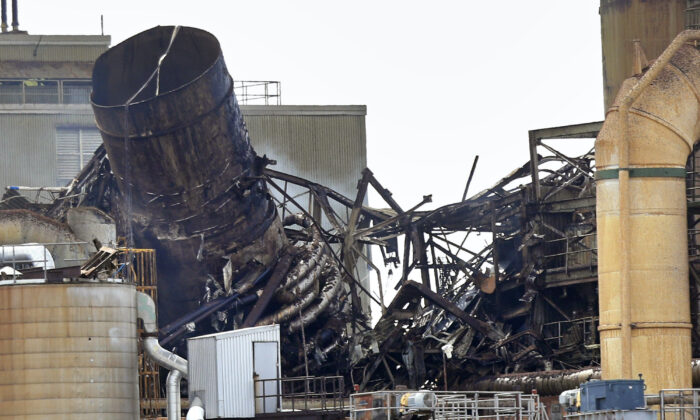 Wreckage smolders at the Androscoggin Mill after an explosion at the paper mill in Jay, Maine, on April 15, 2020. (Robert F. Bukaty/AP Photo)
By The Associated Press

PORTLAND, Maine—An explosion at a paper mill in Maine shook the ground on Wednesday and produced a plume of black smoke that was visible for miles around, but it appeared no one was injured.

The blast rocked the Androscoggin Mill in Jay, in central Maine, around noon, state police spokesman Steve McCausland said. Mill personnel told police no one was injured, though some people suffered respiratory distress.

A rising cloud of smoke that was recorded by a bystander was followed by raining debris that made bullet-like noise as it struck cars in the area. Video recorded after the explosion showed extensive damage to the mill, which employs about 500 people and is a key piece of rural Maine’s economy.

Emergency responders rushed to the mill, and the state fire marshal planned an investigation. The cause wasn’t clear to investigators, and the investigation will likely begin in earnest on Thursday, as the scene was still being secured, police said.

The explosion left significant damage in the area of the mill’s digester, which is used to process raw materials. Mill spokesperson Roxie Lassetter said the company was in the preliminary stages of assessing what happened and evaluating the environmental impact.

The explosion released a mixture of wood fiber, water, and chemicals, and the company is taking steps to restore order to the mill site, Lassetter said. The most important thing is no one was hurt, Lassetter said.

“It’s nothing short of a miracle, and we are grateful,” Lassetter said.

Gov. Janet Mills urged residents to stay far from the Jay scene. She also said during a news conference that the state is “breathing a deep sigh of relief” that the explosion wasn’t a bigger disaster.

“I just want to say, if ever there was a day when we should believe in miracles, today is it,” she said.

The mill had been sold in February by Ohio-based Verso Paper to a specialty paper producer in Pennsylvania.

Pixelle Specialty Solutions, of Spring Grove, Pennsylvania, acquired both the Jay mill and another mill in Wisconsin in a $400 million deal. Pixelle said at the time that the deal would make it the largest specialty paper business in the United States in terms of annual production.

“We ask for everyone’s continued prayers through this and will update information once it is available. We are also asking that you stay away from the area and allow the crews to work,” said Shiloh LaFreniere, spokeswoman for Pixelle.

The mill was built in the mid-1960s in Jay, which today is a community of about 5,000 people. Maine Senate President Troy Jackson said the state will need to support the community and its workforce in the wake of such a major blow.

“To the 500 mill workers, who showed up to work today expecting it to be an ordinary day, I know that this is devastating and that the next few hours, days and weeks won’t be easy,” he said.