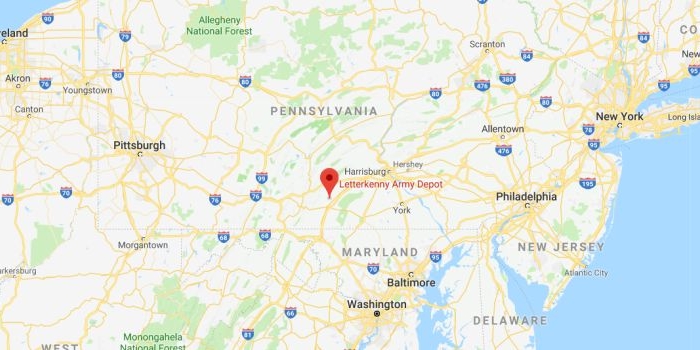 At least four people were hurt on Thursday morning during an explosion at the Letterkenny Army Depot in Pennsylvania.

The depot houses ammunition and missiles.

The Franklin Fire Company said in a statement that there was an “explosion with burn victims.” Three patients required air medical transports.

In another post, the fire officials said, “The incident is contained and will not affect depot operations or workforce safety elsewhere.”

The Letterkenny Army Depot wrote in a now-deleted statement on Facebook: “The incident is contained and will not affect depot operations or workforce safety elsewhere.”

According to the Franklin County Office of Emergency Management, three people were airlifted to Letterkenny Army Depot after the explosion, Fox News reported. There’s no threat to the public.

A spokesperson with the Army depot told an ABC27 reporter that it’s not a terroristic threat. Employees said that the explosion happened in the paint area of Building 350. Meanwhile, base employees were worried about peers who ran out of building screaming and who on fire, the report said.

Officials told the ABC27 reporter that the fire is under control.

“Letterkenny Army Depot develops and delivers materiel readiness for Air Defense forces of the United States and its international partners and builds combat power for combined and joint route clearance operations worldwide,” according to the depot’s website.

UPDATE: Letterkenny Army Depot spokesman say this is not a terroristic threat. Employees say explosion happened in the paint area of Building 350. Employees are worried about peers who ran out of building screaming & on fire. Officials say the fire is under control. @abc27News pic.twitter.com/xUyftt84YY