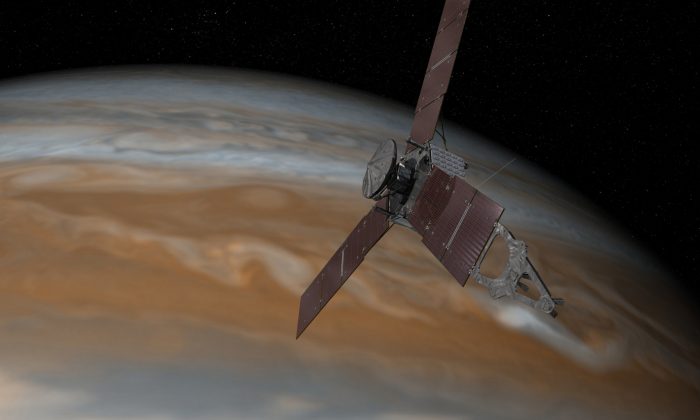 NASA’s Juno probe will be the fastest object humanity has ever created when it approaches Jupiter. (NASA/JPL-Caltech)
Science

Exploring the Solar System: The Best of What You Can Look Out for in 2016

This year is shaping up to be another exciting one for space after a bonanza of discoveries and celestial events in 2015.

One of my hoped-for highlights of 2016, NASA’s InSight mission, has unfortunately been scrubbed due to a serious leak in the last stage testing. But here are three of my particular favorite space missions to watch out for as well as some key night sky events to try and experience throughout 2016.

One of the next big missions to Mars will be the European Space Agency‘s ExoMars program, a two-stage mission.

The first stage is a joint Trace Gas Orbiter (TGO) and Schiaparelli lander which will launch in March (to arrive by October). The technologies demonstrated by Schiaparelli will then be used for a rover to land in any interesting sites identified by TGO as the next stage in ExoMars.

The orbiter will spend five years attempting to “sniff” out those gases in the Martian atmosphere such as methane that break down over time, with any trace amounts indicating a process of creation on Mars. Whether biological (that is, expelled by microbial life) or geological in nature will be investigated throughout the ExoMars program.

A key story for 2016 will be the investigation of Jupiter by NASA’s Juno mission. As the enormous gravity of Jupiter pulls the spacecraft to ever higher speeds, ultimately traveling at more than 70km per second (43 miles per second), Juno will become the fastest craft in human history.

It will fire its rockets to slow down and then enter one of the most challenging orbits ever attempted, skimming as low as just 5,000 km (about 3100 miles) above the cloud tops, ducking below the intense—and damaging—radiation belts of Jupiter to study the gas giant as never before. To put that in perspective, if Jupiter were a soccer ball, Juno would be skimming less than a centimeter (less than half an inch) off the surface.

The aim is to see if there’s water in the atmosphere (revealing the conditions from which the gas giants formed), to study the gas giant’s magnetic and gravitational field, and the nature of the interior.

Thousands of kilometers of clouds crush the core to extraordinary pressures that might form a planet-sized diamond (as Arthur C. Clarke once wrote) or more likely a core of superconducting metallic hydrogen that powers the enormous magnetic field of the planet.

It will be deorbited in February 2018 after 37 death-defying orbits threading through the incredibly dangerous radiation belts.

The latest telescope on Earth could hardly look more different to those that use light (be it visible or radio waves), but LIGO is searching the skies for colliding black holes, with the telltale signals as ripples in the very fabric of spacetime itself. These gravitational waves are Einstein’s final prediction and are yet to be verified.

As a gravitational wave passes through you, you’d be stretched one way becoming thinner and then as the wave continues through you are squashed and fattened. Since this doesn’t visibly appear to happen we can guess that the stretching and squashing is tiny. The expected change is less than the thickness of an atom in a ruler a million kilometers long (about a half a million miles long).

To measure this incomprehensibly tiny change we use lasers (technically an interferometer bouncing two lasers back and forth) in different locations on Earth to triangulate the position to a few degrees on the sky (the width of a few full moons).

Discovering these waves will allow us to see the universe with an entirely new sense, as distinct from hearing to seeing. In 2016, humanity will gaze with entirely new eyes into the cosmos.

There are also some fantastic sights in the sky to watch out for in 2016.

Southeast Asia and Africa will get to enjoy the more visually impressive solar eclipses, with Australia, Europe, and the United States missing out (although everyone can enjoy the stunning meteor showers).

These are selected from a more exhaustive list of all the motions of the planets and other celestial highlights. If not mentioned, all times and viewing directions are from an Australian perspective.

All five planets visible to naked eye—Mercury, Venus, Mars, Jupiter, and Saturn—will appear in morning sky. This is the first time since 2005 and should be something we can all manage to see without telescopes.

This the best time to see the gas giant as it forms a direct line with the sun—Earth—Jupiter. Similar to a full moon, Jupiter will be entirely illuminated by the sun making it appear brighter than any other time this year.

With binoculars you should easily discern the four largest (Galilean) moons sitting in a line either side of the planet.

The total solar eclipse will be visible from central Indonesia and some Pacific Islands. Neighboring regions, such as Northern Australia and Southeast Asia, will see a partial eclipse but protective eyewear should be used at all times. Check the NASA predicted track.

The new moon will mean even more of the faintest shooting stars are visible. Look toward the constellation Aquarius after midnight.

Transit of Mercury Across the Sun

Mercury will pass between the Earth and the sun, with the dark disk of the planet visible across the face of the sun. There will not be another transit of Mercury until 2019 and then the next one will be in 2039.

This can only be seen with specialized protective eyewear and a telescope, including a pinhole camera. Unfortunately, this will not be visible from Australia but will be seen in most of the rest of the world, in particular the eastern United States and eastern South America.

As the third of four full moons in this season, it is known as a blue moon. This is a relatively rare occurrence, hence the term “once in a blue moon.”

Each season you could expect three full moons but the lunar cycle is every 29.53 days meaning on average every 2.7 years you can squeeze in a fourth full moon in a season, nothing to do with the color changing!

The sun and Mars sit directly opposite one another as seen from the Earth ensuring the planet is fully illuminated by the sun.

Mars will be a clear red point of light in the night sky. Using an eight- to ten-inch telescope you can see darker regions amid the orange/rust-colored planet.

Saturn is in a direct line between the Earth and sun meaning that it rises in the east just as the sun sets in the west.

Saturn will be a bright diamond-colored point of light, at its brightest for the entire year. A medium-sized telescope will be needed to see the famous rings.

With up to 60 meteors per hours the Perseids is a reliably good meteor shower as the Earth ploughs through the debris of the comet Swift-Tuttle.

There is only a minimal amount of moonshine (a waxing gibbous moon setting just after midnight) ensuring that the majority of shooting stars will be seen after midnight.

The shooting stars will radiate from the constellation Perseus.

Conjunction of Venus and Jupiter

Two of the brightest planets in the night sky will appear to move toward each other throughout August. They reach their closest point (a conjunction) just after sunset in the western sky (just seven arcminutes apart, or less than the nail of your little finger held at arm’s length) on Aug. 27.

The moon is a little further from the Earth than the March 9 eclipse meaning that it will not completely cover the sun, revealing a burning bright ring (or annulus) around the moon.

The eclipse path will pass through Congo, Tanzania, and Madagascar before ending in the Indian Ocean. A partial eclipse will be visible in the neighboring African nations. Check the NASA predicted track.

First of this year’s three supermoons, when the moon is closest to the Earth in its orbit. This means it is bigger in the sky and hence brighter when fully illuminated by the sun (a full moon) on the opposite side of us from the sun.

Second of three supermoons for 2016.

The Geminids are usually the best meteor shower of the year with up to 120 meteors per hour, but unfortunately there is nearly a full moon this year (a supermoon no less) that will outshine all but the brightest shooting stars.

All other meteor showers this year are from the Earth ploughing through a debris tail from a comet, but the Geminids are unique in being from an asteroid (3200 Phaethon). The radiant is in the constellation Gemini (the Twins).

Third and final supermoon of 2016. What a great way to end the year, but a shame about the Geminids meteor shower.

Alan Duffy is a research fellow at Swinburne University of Technology in Australia. This article was previously published on TheConversation.com