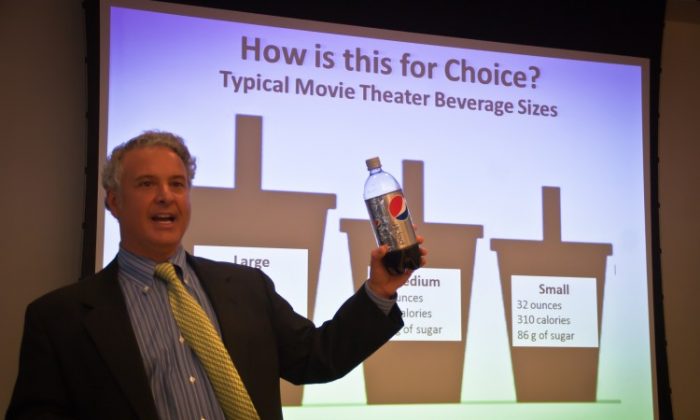 In May, Mayor Michael Bloomberg proposed the ban in city eateries, theaters, and sports venues. A public hearing will be held in Long Island City next Tuesday, July 24, and the Board of Health is expected to vote on the proposal in September. If approved, the ban could take effect in March 2013.

Over the years, serving sizes for food and drinks have become larger and larger.

For example, the original Coca-Cola was 6.7 ounces. Now there is a 64 ounce “double gulp” cup size, which is almost 2 liters, and some stores may sell even larger sizes. At the same time, obesity has become known as an epidemic. This has led to higher health care costs and prompted different levels of government to attempt to tackle the issue in one way or another.

Bloomberg’s proposed ban is one of those ways. The ban targets numerous types of drinks that contain little or no nutrients. Critics have argued that limiting people’s freedom to choose what quantities they consume is not the government’s role, and the link between sugary drinks and obesity is tenuous.

New Yorkers for Beverage Choices, a group that includes beverage distributors and theater owners, opposes Bloomberg’s proposed ban. They say sugar-sweetened beverages like soda, juice drinks, sports drinks, and teas account for only 7 percent of the calories in the average American diet. The group advocated looking instead at “the bigger picture,” including education, diet, and exercise.

“A gimmick like this is not the solution,” said Eliot Hoff, the group’s spokesman, adding that the mayor and the city’s Department of Health (DOH) should focus on its positive initiatives, such as providing more access to healthy food.

The DOH cited four studies in a presentation that linked the intake of sugar-sweetened beverages to obesity and diseases, such as diabetes and heart disease. With more than half of adults—and nearly 40 percent of public students—in New York City obese or overweight, DOH said obesity causes 5,800 deaths every year and $4 billion in direct medical costs in the city.

Limiting sweetened beverages is not a treatment for obesity, but it does prevent weight gain, said Dr. Louis Aronne, clinical professor of medicine at Weill Cornell Medical College. Aronne relayed an experience during the past week that shocked him: Four teenagers, ages 18 and 19, were diagnosed with adult diabetes at the Comprehensive Weight Control Program, which he directs in partnership with New York Presbyterian.

“We’re talking about things that have never been seen in the history of the world,” said Aronne. “It makes us realize something really bad is going on.”

“We talk about portions, how to reduce intake of sweetened beverages—Don’t even buy it, do not bring it into the home,” Parker-Duncanson said.

One nutritional concern is that drinking sweetened beverages displaces healthier choices, such as 100 percent juice, low-fat milk, and water.

Aronne pointed out drink sizes at movie theaters begin at 32 ounces, so the consumer cannot choose a smaller size. The financial incentive to upgrade—larger sizes are usually only a mere $1 or less more than the smaller sizes—can be seen at restaurants as well.

Establishing rules for labeling sizes—such as not allowing a 32 ounce drink to be called “small”—could be a potential alternative to a ban, said David Just, behavioral economist at Cornell’s Dyson School of Applied Economics and Management. He said one study found that people ate 75 percent of a meal when it was labeled “extra large,” but people ate 95 percent when the same portion was labeled “regular.”

While alternatives exist, research should be done before any new rules get put into place, Just said.

“It’s got to be more than just ‘I think this will do the right thing, so let’s put it out there,'” Just said.