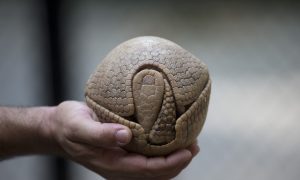 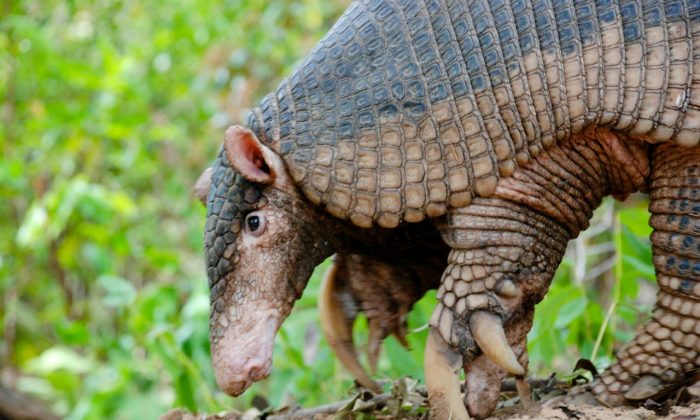 A giant armadillo in the Pantanal region of Brazil. A multi-year study marking its third year in July has found important information about this little-known secretive species. (Courtesy of Pantanal Giant Armadillo Project)
Americas

A Look at Little-Known Giant Armadillos

ITATIBA, Brazil—Until just recently the science world knew little of the giant armadillo, the largest of the armadillo species living in South America. But that has changed thanks to a study by a team of researchers who set out to find out more about the armored mammals in South America. The ongoing study will mark its third year this month.

The habitat of giant armadillos is widespread in South America, spanning 12 countries. In Brazil, they are found in Pantanal, a large tropical wetland region located mostly in Mato Grosso do Sul State.

“The main objective of the project is to investigate the ecology and biology of the species and understand their role in the ecosystem. We simply do not know anything about this species,” Arnaud Desbiez, conservation biologist and the project coordinator, told Epoch Times in an email.

The researchers conducted their study using radio transmitters and camera traps to monitor the animals in their burrows and other areas.

According to the study, giant armadillos can reach 50 kilograms (110 pounds) in weight and over 150 centimeters (59 inches) in length.

Researchers have also discovered during the study that giant armadillos are “engineers of the ecosystem” since they create or modify habitats.

“Our studies show that the giant armadillo’s burrows are important shelters and thermal refuges for a wide variety of species (more than 25), ranging from small lizards to large peccary,” Desbiez said.

The researchers also found important information about the reproduction of the species, discovering that they give birth to only one offspring per pregnancy.

Giant armadillos are classified as “vulnerable” on the Red List of Threatened Species of the International Union for Conservation of Nature (IUCN).

Desbiez warned that the armadillo may become locally extinct without anyone noticing. “It occurs in low densities, has nocturnal habits, secretive, and can easily go unnoticed. In our study area in the Pantanal, almost none of the local population, some of them living in the area for over 30 years, never saw this kind,” Desbiez said.

The study is being conducted as a partnership involving a number of organizations including the Royal Zoological Society of Scotland and the Institute for Ecological Research in Brazil, among others.

Local community support has been an important element of the project, Desbiez said, and the researchers have tried to familiarize the locals with the animal as part of the project.

“Neighbors of the project give us much support,” Desbiez said.

The researchers also hold lectures in schools and town centers to teach more about the species.

“The armadillo has a great potential for environmental education and dissemination. The species has a fascinating history of evolution, presents distinct adaptations (front claws and shell), an interesting role in the ecosystem, has an intriguing look that captivates audiences and, in general, people have never heard of them,” Desbiez said.

Local resident Rita Maria Jurgielewicz, a hotel owner, has been following the study closely since the beginning.

“We ask our employees to give notice when they see the [armadillo] burrows,” Jurgielewicz said. This would help researchers place their radio transmitters and cameras to study the animal.

Supporting the project, Jurgielewicz said, stems from the “Pantanal culture” of the people to preserve the area and its species.

“We were always aware that we must preserve and study any endangered species. The wetland conservationists have had a presence here since the time of my grandfather,” Jurgielewicz said.

“I love Pantanal and its beauties, and we are always more interested in its preservation. So we are always following the news related to them (studies). “

Jurgielewicz acknowledged that she had never seen a giant armadillo before the project was launched.

“We knew of their existence, we knew a few hikers who had seen them, and sometimes we could see the burrows. But I went to see the animals after the project was launched.”